I start the song, by repeating “hustle the money” “me a hustle the money” almost to make the message subliminal. Careful. Read again. Haters, critics, read again and listen carefully – its hustle the money – not steal the money, not take a gun and rob the money, not start a ponzi and con the money- just hustle the money. I stress the point repeatedly because there is a sector of society that believes when ghetto youths acquire ambition for financial success it means that we are going to begin to embark on some unscrupulous or illegal behaviour to rob people money. I often wonder why the elite of society don’t think us ghetto youths don’t want the same for our family as they do. NEWSFLASH, we waan go big school, drive nice car too, we would like ac in our house, we want our mother retire young and yes we want to be rich, there, I said it, Vybz Kartel want Ghetto people to be rich. Babylon, deal with it. 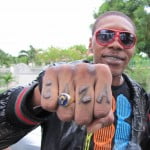 Society, likes to blame us poor people for Jamaica’s weak economy. Not true, not fair. The only thing I have heard creative where government is concerned is how to increase and make new taxes. That does not make sense, in fact, there is a term for it – we have a regressive tax system where the poor is forced to bear the biggest burden and the rich keep getting away. They recently tried to tax patty and pad hard. Rich man don’t eat patty for lunch and rich ladies shop in foreign. Our government so good at taxing, they found a way to tax Jamaicans overseas by putting over a 100% levy on calls coming in on a landline, even the US companies begged for us but our government said no, tax them. The Custom’s Department just celebrated 7.7 billion dollars in collections above the 98 billion they projected for 2010. Now, say what they want, we know most of that money come from people who work overseas and struggle to send little things for their families or our Informal Commercial Importers or “higglers’ who hustle little buying and selling. The tax man now open an informer line and stop people from travelling over taxes which is confusing because if you want a deejay to pay his tax bill, why prevent him from earning money to pay you Mr. Taxman? How does that make sense? How you punish a man for not paying his bills and then kill his livelihood at the same time? You sure you not trying to kill his livelihood and using the tax issue as a cover? Pon the Gaza, we don’t take anything Babylon do simple, them always preeing the Dollar Sign, so we say Ghetto people must pree it to.

I am not naïve, I know a country needs taxes to run but have we not gone too far when we want to tax patty and women “necessaries?” We know that without vision the people perish and trust me, poor people perishing really bad every day. We pree the real numbers pon the Gaza, our debt (poor people never borrow any of it) is over 125% of our GDP, put it another way, we owe at least a 1/4 more than what our economy produces. Congratulations Jamaicans, even though the bank never lend you any money, you owe more than $500,000 per person when you divide the total debt of Jamaica by its population. Hence, every man, woman and child even the baby on his mother’s breast, born half of a million dollar in the hole. By the way, in case you never know majority of that debt is what Society used to bail out their rich friends when their businesses failed and could not pay back the bank. When poor people can’t pay back the bank, bailiff come to take your things – so the thing set Jamaica.