The I’Akobi Resource Centre, named after the late UWI student who some feel was victimised by elements of Law Enforcement while others wonder if personal issues led him to accidental suicide, has embarked on a “Justice Mediation Project” to inform members of the Rastafarian community exactly where do they stand in relation to laws, rights and expectations of society.

The first session was with Andrew Pilgrim, many will recall him in many a play across the island which may hone his dramatic skills for the Courts when he pleads or prosecutes, depending on the case – he also was involved on the inquest as to what really happened with I’Akobi Maloney.

The small room quickly filled and despite many large fans blowing, the room was warm not only with the number of bodies but the topic for chat increased the temperature...

Many useful things were disclosed at the two-hour session; if one touches a person lightly this can be construed as “Assault” depending on the circumstances it occurred and if Police have “Reasonable Grounds,” such as Rape/Wounding, Breach of the Peace, etc. Then the Law is in its purview to either hold or detain you – BUT THERE IS NO LAW IN BARBADOS WHICH SAYS 48 HOURS IS THE MAXIMUM PERIOD FOR HOLDING A SUSPECT, THAT IS A MATTER OF CONVENTION!

With the Barbados Evidence Act lacking sections #72 and #94 which pertain respectively to recording Police Interviews and setting the basis of an Officer’s behaviour and deportment then Civil Liberties of both Citizens & the RBPF remain in jeopardy according to the attorney who’s practised for the last 19 years.

Barbados is one of the few places in the world which still do not have a Policy nor enact any guidelines of recording Interrogations, whereas St Vincent has far superior legislation and equipment concerning the same situation. The theatrical lawyer also looked at the preparation of warrants and informed the constantly growing audience that these documents can only be issued by Magistrates or Justices of the Peace. 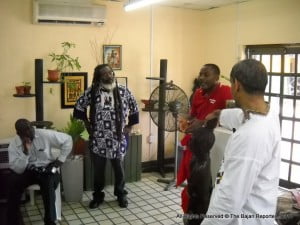 Pilgrim is of the strong suspicion that many JP’s have been given such broad powers simply as repaying a political canvasser for a job well done! When he spoke with a JP once, he learned this Justice never lodged the warrants they issued at the Registrar’s Office nor even were aware they had to do so; they weren’t aware they could refuse a warrant on any reasonable grounds either!

It is JP’s like these who can make it easy for elements of the Force to seek to prepare in advance a sheaf of warrants, not unlike a blank cheque… The attorney sees the need for JP’s to have training and/or qualifications before assuming such a post, which can impinge dramatically on the lives of many an average Bajan citizen.

The participants were not only Rastafarians, but a rather wide cross section of Barbadian lifestyles.

Mr Pilgrim also lamented how the Court system in its present form allows many white Barbadians to slip the legal system simply because they may have cash, and the fact how Court Records are not computerised may allow for further tinkering or tomfoolery with White Justice as opposed to Black Justice where a known Rasta toker is forced to assume the rap for an illegal gun found at a football shooting, when in fact “Ras Pilly” may have had NOTHING to do with the crisis – more proof why Interviews should be recorded…

Andrew Pilgrim expressing his frustration and disbelief how when he spotted the Attorney Genral Adriel Brathwaite and tried to pinpiont him on when the Chief Justice will be appointed, that Mr Brathwaite looked at him and said {Pilgrim}'s barking up the wrong tree - so WHO should know? Freundel "Silent Calvin Coolidge" Stuart?

Pilgrim did not hesitate to imply there are some Officers who are less ethical, and they will place a plastic bag on your head and spray Baygon while others will use the Iranian method of torture; which is to flog the soles of your feet – you have trouble walking and marks are difficult to locate…

The lawyer feels settling a case be it rape, cuffing or similar cases is a matter of personal choice but he feels the best way to cut the caseload of the good members of the RBPF is to decriminalise Marijuana, he explains why {CLICK ON FOLLOWING LINK FOR FULL AUDIO};-

As far as Pilgrim is concerned if people want Cocaine or XTC then give it to them but explain the consequences, Pilgrim says we complain of Marijuana yet allow Whickey which is where Al Capone made his money – with Rastas using the chalice they unintentionally create gangsters, which if Drugs were legal then that would stop.

The next session is with Douglas Trotman on 25th June concerning “Squatting – Landlords & Tenants” while Arthur Holder will appear 30th July at the Centre on “Burning Refuse, Property Boundaries & Playing Loud Music.”