Digicel is pleased to announce that it has formally been awarded Tier III Design Certification for its Data Centre facility in Jamaica from the Uptime Institute, recognized within the industry as the world leading standards body for data centres. This now makes Digicel’s data centre the only Tier III certified data centre in Jamaica and in the Caribbean. 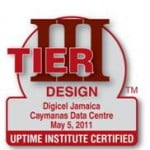 Managing Principle at the Uptime Institute, Vincent Renaud, said; “The Uptime Institute is pleased to announce that Digicel has achieved Tier III Design Certification as fulfilling the Institutes Concurrently Maintainable data centre criteria. We would like to congratulate Digicel on this achievement – the first Tier III certified data centre in Jamaica and the region.”

This Tier III certification confirms that Digicel’s mechanical and electrical infrastructure has the highest level of redundancy possible in any market that is served by a single Power Utility provider – which is the case for most countries and territories in the world. It further confirms that every component of Digicel’s infrastructure has the resilience and redundancy necessary to keep its facility fully operational in the event there is a major power systems failure or if the systems need to be taken out of production for planned maintenance activities.

Digicel is investing heavily in the development of Cloud Services in Jamaica and the fundamental foundation block for this technology is the requirement to host these platforms in a certified Data Centre.

Digicel Jamaica CEO, Mark Linehan, said; “This is a very important milestone for Digicel and more importantly for our customers – and it is also another first to market for us in Jamaica. With this being the highest achievable rating in the region, it provides our customers with access to a facility on par with some the best in the world. Customers at our data centre can rest assured that their systems and data are secured and powered to the highest possible standard within Digicel’s Tier III certified data centre.”

Opened in November 2009, Digicel has invested a total of US$7 million on the three story facility with 8,000 square feet of space available to businesses in Jamaica and across the region. The Tier III certified data centre is currently supporting the critical IT infrastructure of businesses and Government entities with services such as Managed Hosting, Cloud Backup and Co-location.