Freedom Of Press, Internet and even Mobile Conversations are now under threat whether visiting Charlestown or Basseterre, since both sides of Government agreed to pull a George Orwell and essentially legalise Wiretapping;- 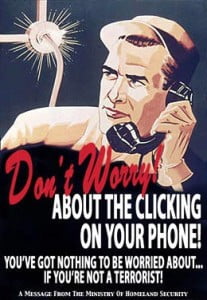 Public Relations Officer (PRO) of the Royal St. Christopher and Nevis Police Force, Inspector Vaughn Henderson, says the practice of intercepting communications is not a novel idea as it has a standard piece of legislation that exists in a number of regional and international countries. He explained the crime fighting tool has effectively been used in combating terrorism and major criminal activity worldwide.

The Interception of Communications Bill 2011, which is designed to strengthen the legislative framework of St. Kitts and Nevis to combat crime, passed unanimously in the Federal Parliament, on Friday after two days of intense debate.

The Bill provides for the “lawful and legal” interception of all telecommunications networks including telephones and internet transmissions, and telegraphy and mail handling systems. Attorney General, Honourable Patrice Nisbett said that there were safeguards in place to ensure public confidence with regard to the legislation. He added that no interceptions would take place unless a warrant, which he described as “an application of last resort”, was filed for and approved by a High Court Judge.

Opposition Leader Honourable Mark Brantley gave support to the Bill in Parliament on Wednesday. He explained that his stance was influenced after several conversations with various members of the security forces who favored the passage of the Bill to assist the investigation of serious crimes.

SKNIS spoke to the Public Relations Officer (PRO) of the Royal St. Christopher and Nevis Police Force, Inspector Vaughn Henderson, who welcomed the passage of the legislation. The police official noted that the practice of intercepting communication was not a novel idea as it has a standard piece of legislation that exists in a number of regional and international countries. He explained that the crime fighting tool has effectively been used in combating terrorism and major criminal activity worldwide.

Inspector Henderson stressed how the law would assist local authorities.

“If the authorities have the authority to infiltrate these communications before it reaches its designated destination – that is the criminal end of it, then and there, we might be able to capture the evidence and to prosecute those who are perpetrating these crimes,” he stated. “Also if we have [the] effective interception of communication law, it also acts as a deterrent to would-be criminals who would want to use a particular medium of communication in order to effect their criminal activities.”

The Inspector added that any lawfully collected communication would also lessen the dependence on alternate forms of evidence.

“The fear of crime has escalated and so it is more difficult now to have witnesses appear in court. We are saying if there is effective and sufficient interception of communication laws then law enforcement would be able to get sufficient evidence to singlehandedly successfully prosecute some of these criminals,” Mr. Henderson stressed.

The Inspector concluded by expressing confidence in the many procedural measures established by Government to protect against the abuse or misuse of any collected information, and assured law abiding citizens that there was nothing to be apprehensive about.