Barbadian film, A Hand Full of Dirt has been chosen as one of 9 nominees for Best First Feature Narrative Director at the 19th Annual Pan African Film Festival in Los Angeles this month. The film was selected by a committee from a field of over 117 films screening at the festival from across the United States, Africa, the Caribbean, Latin America, Europe, the South Pacific and Canada. 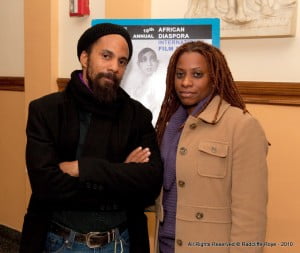 A Hand Full of Dirt has been quietly making its way on the international film festival circuit, attracting very positive feedback from industry professionals and viewing audiences, and has been quickly growing in acclaim. Los Angeles is only the third stop of a festival journey that started in Trinidad and New York at the end of last year. Local audiences will get to see the movie on home turf on March 16th when it screens as the Opening Night film of the Caribbean Tales Film Festival 2011 at the Frank Collymore Hall.

The project was the brainchild of Writer/Director, Russell Watson, in partnership with Producer, Lisa Harewood. Set in Barbados and Chicago, A Hand Full of Dirt tells the compelling story of the Redman family, torn apart by a dispute over land and the disappointment brought on by failed dreams and unfulfilled expectations. The movie boasts the talents of Caribbean theatre luminaries, Alwin Bully, Luther Bourne, Marcia Burrowes and Cynthia Wilson and introduces fresh talent including Nigel Scotland in one of the principal roles.

According to the team, after more than five years working on the piece on a shoe-string budget, the film’s rapid success on the festival circuit has been an unexpected surprise:  “To be honest, we had been trying unsuccessfully to raise the money to finish and release the film for almost a year. We decided to use the last of our resources to go ahead and enter our first film festival in Trinidad and Tobago, really a way to test the film in front of an unbiased audience and see if we could generate some press and reviews to bring back with us to try again to raise funds. Everything that has happened since has really exceeded our expectations.”

Not only was A Hand Full of Dirt selected for Trinidad’s premiere film festival, but it was chosen from more than 80 films to open at the event’s Gala Premiere in Tobago for the Tobago House of Assembly and Chamber of Commerce. Out of that appearance, the project attracted much positive press and from an entirely unexpected but welcomed source.

In attendance at the Trinidad festival was Brandon Harris, a writer for Filmmaker Magazine, an international publication considered a “bible” of the independent film industry worldwide. In his review of the festival on the magazine’s blog he wrote, “bright spots like Russell Watson’s highly watchable Barbados-set drama A Hand Full of Dirt…made positive impressions.”   The pair believes this is the first time Barbados has ever been mentioned in this international film publication.

From debut in Trinidad, the film continues to generate positive momentum, all its own. Its North American premiere at the African Diaspora Film Festival in New York in December drew some of the largest crowds of the festival, thanks to the Caribbean Diaspora community, which braved bitingly cold weather to support it. On February 18, the project racks up another major achievement with its US West Coast premiere at the prestigious Pan African Film Festival in Los Angeles, the hub of the film industry in the United States. The power of the increasingly positive word-of-mouth reviews has also resulted in Watson and Harewood being invited to submit the film to festivals in Boston, Chicago, Canada and as far away as Zanzibar, East Africa.

For more information on A Hand Full of Dirt and to view the trailer visit ahandfullofdirt.com. You can also follow the film’s progress and post messages of support on their Facebook page.

Producer, Lisa Harewood noted “The demands on our time and limited resources have been non-stop since September. We’ve had to just do our best to try to keep up. We were lucky and very thankful to have had some initial support from Invest Barbados to travel to the first two festivals, and some timely donations from a few supporters, but here we are – heading to Los Angeles and lack of funds remains a serious challenge. It can be demoralizing and frustrating at times trying to convince funders of the quality of the project but the response from audiences and industry experts lets us know we are on the right track. Thankfully, there are so many people who simply believe in the film who keep encouraging us to press on. That is very humbling and very gratifying.”

In looking forward to the Barbados premiere next month “We are both excited and anxious at the same time. This will be our most treasured audience, our family, friends, supporters, test audience and many of the cast and crew who have yet to see the finished film. We want to do them proud. We are really looking forward to sharing A Hand Full of Dirt with Barbadians from all walks of life; hearing their unique Bajan reactions to our first effort at capturing on film a slice of some of their experiences.”