KFC has exceeded its promised support of the Young Women’s Christian Association (YWCA) of Barbados by doubling the total amount of funds accumulated from the World Hunger Relief collection bins placed at all thirteen of KFC’s branches across Barbados. 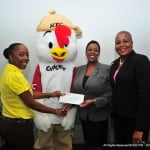 KFC’s Marketing Coordinator, Shekelia Barrow presents a cheque to the YWCA’s treasurer, Paige Bryan while KFC’s mascot, Chicky and President of the YWCA, Marilyn Rice-Bowen join in on the happy occasion.

The YWCA is the recipient of KFC’s 2010 World Hunger Relief Fund efforts and they have noted that the funds will be used to assist the Breakfast Club Programme which provides a well-balanced breakfast to over 850 children five days a week, free of cost.

President of the YWCA of Barbados, Marilyn Rice-Bowen said the donation provides much needed support for a very worthwhile and rewarding programme:

“We started The Breakfast Club in January of 2007 in response to an informal survey which said many children living in Barbados were going to school without breakfast. Motivated by studies indicating the value of breakfast, which is said help children more alert, concentrate better and perform better in school as compared to those who do not eat breakfast, we were moved to address this social injustice and have been encouraged by the constant growth in the number of children who benefit from The Breakfast Club.”

In addition to the cash donation, KFC also provided the YWCA with vouchers for the children who are members of the Association’s reading club, which follows the treat already provided to them at the end of last year, when the reading club was invited to KFC’s Christmas with Santa campaign.

Marketing Coordinator at KFC, Shekelia Barrow said the YWCA’s Breakfast Club was a worthy recipient of the donated funds:

“The YWCA is a champion of hunger relief here in Barbados and we felt they not only deserved what was donated by the public, but also additional assistance from KFC, as we champion efforts to alleviate hunger locally and on a broader scale through our association with the global World Hunger Relief organization. We are encouraged by the support of the public and would like to thank all our customers for their support.”

Besides the local donation 50% of the funds collected are sent to the coordinating international organisation for world Hunger Relief.