The Christmas Truce by David G. Stratman – Based on a song that nearly ended World War I

It was December 25, 1914, only 5 months into World War I. German, British, and French soldiers, already sick and tired of the senseless killing, disobeyed their superiors and fraternized with “the enemy” along two-thirds of the Western Front (a crime punishable by death in times of war). German troops held Christmas trees up out of the trenches with signs, “Merry Christmas.” 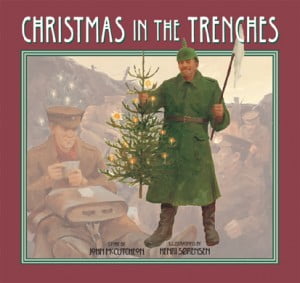 The song became the most requested recording during the 1988 holidays in Boston on several FM stations.

“You no shoot, we no shoot.” Thousands of troops streamed across a no-man’s land strewn with rotting corpses. They sang Christmas carols, exchanged photographs of loved ones back home, shared rations, played football, even roasted some pigs. Soldiers embraced men they had been trying to kill a few short hours before. They agreed to warn each other if the top brass forced them to fire their weapons, and to aim high.

A shudder ran through the high command on either side. Here was disaster in the making: soldiers declaring their brotherhood with each other and refusing to fight. Generals on both sides declared this spontaneous peacemaking to be treasonous and subject to court martial. By March 1915 the fraternization movement had been eradicated and the killing machine put back in full operation. By the time of the armistice in 1918, fifteen million would be slaughtered.

Not many people have heard the story of the Christmas Truce. On Christmas Day, 1988, a story in the Boston Globe mentioned that a local FM radio host played “Christmas in the Trenches,” a ballad about the Christmas Truce, several times and was startled by the effect. The song became the most requested recording during the holidays in Boston on several FM stations. “Even more startling than the number of requests I get is the reaction to the ballad afterward by callers who hadn’t heard it before,” said the radio host. “They telephone me deeply moved, sometimes in tears, asking, ‘What the hell did I just hear?‘ ”

I think I know why the callers were in tears. The Christmas Truce story goes against most of what we have been taught about people. It gives us a glimpse of the world as we wish it could be and says, “This really happened once.” It reminds us of those thoughts we keep hidden away, out of range of the TV and newspaper stories that tell us how trivial and mean human life is. It is like hearing that our deepest wishes really are true: the world really could be different.

Christmas in The Trenches – Song

To listen to this inspirational Christmas story in song: click here 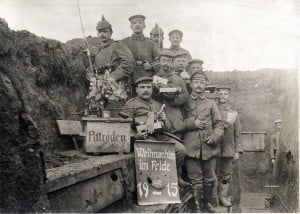 "They sang Christmas carols, exchanged photographs of loved ones back home, shared rations, played football, even roasted some pigs. Soldiers embraced men they had been trying to kill a few short hours before. They agreed to warn each other if the top brass forced them to fire their weapons, and to aim high."

My name is Francis Toliver, I come from Liverpool.
Two years ago the war was waiting for me after school.
To Belgium and to Flanders, to Germany to here,
I fought for King and country I love dear.

‘Twas Christmas in the trenches, where the frost so bitter hung.
The frozen fields of France were still, no Christmas song was sung.
Our families back in England were toasting us that day,
Their brave and glorious lads so far away.

I was lying with my messmate on the cold and rocky ground,
When across the lines of battle came a most peculiar sound.
Says I, “Now listen up, me boys!” each soldier strained to hear,
As one young German voice sang out so clear.

“He’s singing bloody well, you know!” my partner says to me.
Soon, one by one, each German voice joined in harmony.
The cannons rested silent, the gas clouds rolled no more,
As Christmas brought us respite from the war.

As soon as they were finished and a reverent pause was spent,
“God Rest Ye Merry, Gentlemen” struck up some lads from Kent.
The next they sang was “Stille Nacht,” “‘Tis ‘Silent Night,'” says I,
And in two tongues one song filled up that sky.

“There’s someone coming towards us!” the front line sentry cried.
All sights were fixed on one lone figure trudging from their side.
His truce flag, like a Christmas star, shone on that plain so bright,
As he bravely strode unarmed into the night.

Then one by one on either side walked into No Man’s Land,
With neither gun nor bayonet we met there hand to hand.
We shared some secret brandy and wished each other well,
And in a flare lit soccer game we gave ’em hell.

We traded chocolates, cigarettes, and photographs from home.
These sons and fathers far away from families of their own.
Young Sanders played his squeezebox and they had a violin,
This curious and unlikely band of men.

Soon daylight stole upon us and France was France once more.
With sad farewells we each began to settle back to war.
But the question haunted every heart that lived that wondrous night:
“Whose family have I fixed within my sights?”

‘Twas Christmas in the trenches where the frost so bitter hung.
The frozen fields of France were warmed as songs of peace were sung.
For the walls they’d kept between us to exact the work of war,
Had been crumbled and were gone forevermore.

My name is Francis Toliver, in Liverpool I dwell,
Each Christmas come since World War I, I’ve learned its lessons well,
That the ones who call the shots won’t be among the dead and lame,
And on each end of the rifle we’re the same.