Future Centre Trust’s “Clean Up Barbados” gets a helping hand from the Opposition: St. Philip Team, On The Job, Among The People And Busy – Did any Cabinet Ministers assist?

Tamara Marshall and the Future Centre Trust have been working overtime to ensure these 166 square miles which we call (are mostly, still) our own retain a degree of pristinery necessary not just for tourism, but for our health and also our self-esteem… The last time this initiative happened, Barbados Free Press was quick to observe the lack of support from those in Office, especially the Ministers of both Environment & Health!

The plan to be proud and industrious in maintaining the appearance of Barbados as gem-like as possible had many hands lightening the work, yet again, no indications so far if any members of the ruling Democratic Labour Party assisted. However, it can be verified that two hopefuls from the Barbados Labour Party camp put their backs, shoulders and all other required efforts into beautifying this country as a concerted and concerned entity. 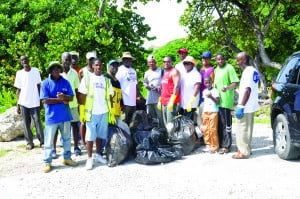 Here’s a report on their commitment to good works in not just words but deeds;-

It was not long ago that a Panel Discussion on the Economy was held at the BWU Labour College, Mangrove, St. Philip – under their patronage but earlier today, Saturday, September 18th 2010, Roger Smith – the candidate for St. Philip West (who is also a member of the Barbados Labour Party’s Team on Physical Development and the Environment) and Indar Weir, the Candidate for St. Philip North (who is a member of the Barbados Labour Party’s Economic Team) hit the ground running and were back on the job, busy on behalf of the people of St. Philip and Barbados.

Accompanied by over thirty-five (35) persons including some drawn from the Foul Bay Community Group, the Barbados Labour Party along with personnel from the Sanitation Service Authority (SSA). They worked from just after 7:00 a.m., in a clean up campaign of Foul Bay Beach, St Philip.

Just over sixty (60) bags of garbage were collected. The Foul Bay project was part of the national clean-up campaign organised by the Future Centre Trust. As part of that effort, the BLP chose the Foul Bay campaign to make an input in this islandwide project.

This initiave is consistent with the directive given by our Leader – The Hon. Mia Amor Mottley, Q.C., M.P., that Members of the Party must do what she refers to as: “Good Works Programmes,” within communities across Barbados.

It is also consistent with the new direction in which Miss Mottley – who’s running for the Office of  ‘Chairman of the Party‘ in October – wants to take the Barbados Labour Party. As correctly pointed out by our Leader, you do not have to be in office to do “Good Works” within communities and in the national interest on behalf of the people.

Miss Mottley is working to move the Party and Barbados forward. That’s why this initiative this morning is so important because it’s consistent with her “good works philosophy,” and amplifies our focus on renewing the foundations that make this country great.

Based on their selfless commitment to the enhancement of life in the parish and Barbados – Roger, Indar and the entire Team must be congratulated for their leadership and commitment to the mandate given by the Leader of the Party – who could not attend because she is currently out of the island.