TENNIS POISED TO RECLAIM PROMINENCE IN BASSETERRE WITH ASSISTANCE FROM CARACAS

Three weeks of tennis skills development concluded with a promise to streamline the growth of that sport in St Kitts.

Director of Sports Dave Connor told SKNIS that his Department is working closely with the Embassy of the Bolivarian Republic of Venezuela on a number of initiatives designed to revive player and public interest in what Coach Ludis Francis termed “the forgotten sport.” 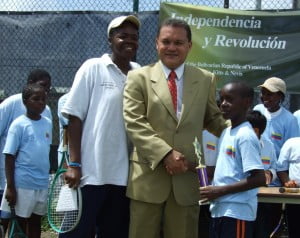 The comments were made during a tour of the Government’s annual Summer Tennis Initiative recently. The camp was once again sponsored by the Venezuelan Embassy and attracted dozens of children between the ages of 6 to 16. Most of the students are part of the schools’ tennis programme implemented by the Department of Sports.

The final week of the camp was devoted to the top 20 participants who were exposed to more advanced training.

Venezuela’s Resident Ambassador His Excellency Cruz De Jesus Bello was treated to an exhibition by several players when he visited. He noted he’s pleased with the advancement of the attendees and announced that plans were being considered for exchange visits between tennis athletes from both countries. 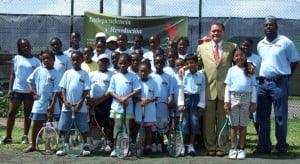 Ambassador Bello remarked that his country is using sport to help celebrate its 200th year of Independence being commemorated in 2010. Arrangements are being made for a sports gathering between teams from Venezuela and St. Kitts and Nevis that will contest volleyball, football and cricket. Additionally, this year’s Independence Mini-Marathon which is hosted in September by the Embassy of Venezuela in honour of the Federation’s anniversary of nationhood will be made special, the diplomat promised.