“Mais Non!” is huge outcry In France now, why? Asterix inhales a Big Mac instead of Wild Boar!

In surfing Reuters, I found this so-called recipe for disaster? 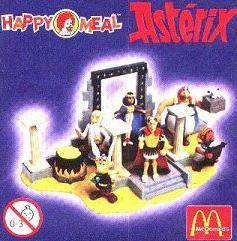 A new McDonald’s ad featuring Gallic champion Asterix enjoying a burger and fries has sparked outrage among French comic purists who see it as an insult to their national heritage.

The billboard shows the fearless Gaul and friends celebrating their traditional banquet at the fast-food chain — with Cacofonix the bard tied to a tree outside as usual.

“My childhood hero sacrificed like a wild boar! What next? Tintin eating at Subway?“ said one horrified blogger called sirchmallow.

“How ironic, the indomitable Gauls making an advert for the invaders,” was another outraged comment on Twitter.

The ad is of three designed by advertising agency Euro RSCG for McDonald’s’ “Come as you are” campaign.

The others feature Cinderella pulling into a McDrive on a pumpkin, and the Ghostface character from the film “Scream“ tucking into a Big Mac.

McDonald’s has frequently been the focus of anti-American sentiment in France and is seen by many to symbolize the threat to French culture and cuisine posed by globalization and homogenized junk food.

In 1999, anti-globalization protesters led by Jose Bove dismantled a McDonald’s restaurant in southwest France, dumping the rubble outside the local town hall.

In 2001, McDonald’s signed him up to replace Ronald McDonald in its marketing campaign to tie in with the release of the film Asterix and Cleopatra.

“It’s not that much of a shock. It’s hardly the first time our Gauls have put money first,” said one blogger.