Debutant off spinner Shane Shillingford made the best of a rain curtailed and soggy first day of the First Digicel Test at the Queen’s Park Oval in Trinidad. The tall Dominican enjoyed a fine start to his international career in grim conditions, as he extracted the two South African openers at a cost of five miserly runs from a six over spell. 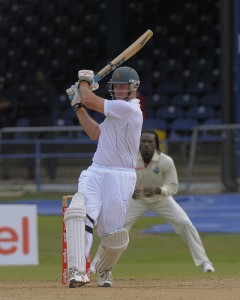 The Proteas – the second highest ranking Test team in the world – closed the day in the uncomfortable position of 70 for 3, with veteran batting maestro Jacques Kallis on 6 and nightwatchman Paul Harris not yet off the mark.

Shillingford, delivering with a bounding run up and sprightly action, accounted for Alviro Petersen via the lbw route for 31 and Captain Graeme Smith was caught at first slip by his nemesis Dwayne Bravo for 23.

The day’s proceedings left the West Indies in the unfamiliar position of a slight ascendency on the opening day of a Test match against a top ranked side.

Shillingford though, was not a one man show as embattled left arm spinner Sulieman Benn dispatched the in-form Hashim Amla for 2. Amla – the Man of the Series in the Digicel One Day International Series – was, like Smith, snapped up low at slip by Bravo.

The day’s play commenced just before the scheduled tea interval, following the entire first session being lost due to rain which persisted for most of the morning and resulted in lunch being taken 30 minutes early. Only 34 overs were possible due to rain and poor light which brought a premature end to the day’s activities. 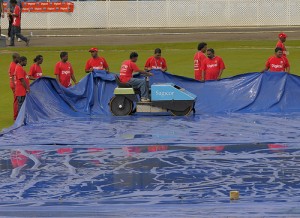 The water hog was busy on the first day - Brooks La Touche Photography and DigicelCricket.com

Though he stroked the ball crisply after the belated start, Petersen’s innings was fortuitous as he was dropped by wicketkeeper Denesh Ramdin off Benn when he was on 23. And he was involved in two Umpire Decision Review System decisions. The first was to his benefit, while the latter cost his team as his dismissal – via the lbw route to Shillingford – was upheld.

Petersen was struck on the boot by a Benn full toss but Umpire Steve Davis negated the appeal. After lengthy consultations, Windies Captain Chris Gayle asked for the review which showed that the ball had pitched, just marginally, outside the line of off stump thereby causing Umpire Davis’ decision to stand. 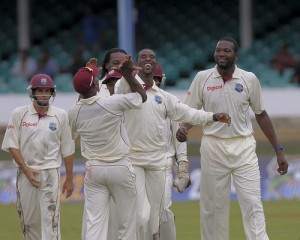 Shane Shillingford gives Dwayne Bravo a high five for taking the catch to give him his first Test scalp - Brooks La Touche Photography and DigicelCricket.com

The opposite occurred when the right hander was eventually dismissed. Shillingford struck him in line of the stumps and the other umpire – Asad Rauf – raised the finger. After checking with non-striker Kallis, Petersen appealed the decision but had to depart after it was not overruled.

While Shillingford enjoyed the plaudits, the Windies bowlers stuck to a consistent line throughout the 34 overs with Bravo excelling. The medium pacer bowled with immaculate control resulting in his eight overs allowing a mere 12 runs. Like Benn (11-4-21-1) he bowled four maidens – two more than Ravi Rampaul (6-2-19-0) who opened the bowling alongside another debutant, Nelon Pascal (3-0-7-0). 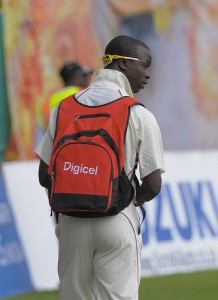 The Windies’ persistence, aided by conditions which made batting markedly more challenging, allowed them to be upbeat after the shortened first day. It is for them to keep at it over the remaining four, a task which has found them wanting in the past. They have started better than most had expected, even as they are missing all three of their premier fast bowlers – Fidel Edwards, Jerome Taylor and Kemar Roach. Consistency has been their bugbear, it is one they are poised to shrug off.