When I was just beginning at CBC, I would have Hormel’s Spicy Tamales for lunch very often – cheap and easy to prepare, a {then} bachelor’s dream… Forgetting that many people of Barbados are some of the most critical and malicious people in the Universe – a hideous combination of itself, I dared open my container to face inspection from the retarded horde…

“WHA’S DAT?” One of them screeched – not unlike dry chalk on a dryer blackboard – not affected by the scorn, I took my time and explained – in vain…

“NOT ME, I STICKING TO MY GOOD BAJAN FOOD!” they Jingoistically squawked, since I revealed Tamales were Mexican, and I said if they don’t know a food they would avoid it, but for me? If it’s new then I must try it out! I received stares from canteen users like if I was Klaatu or Gort. Then the adjudicators actually admitted to pride in their basic knowledge of Culinary Delights, and squealed in abject terror when they learned I ate snails/escargot in Garlic Butter and had Calves’ Brain as a fritter.

Those canteen regulars at CBC were not the only Gustatory Luddites I encountered, when Virgin Atlantic launched Upper Class seating for the Caribbean in September 2000 – there was a chance to hobnob with Richard Branson at the Round House in London (former chalk quarry turned nightclub) and when the speeching was done, it was time for dinner – here’s what the Bajan Media ate…

Nation Publishing? Had a Caribbean platter… VOB 92.9? Ordered a steak… Why, I wondered to myself, would you eat what you already got at home? Sooooo…. That crazy Anchor from CBC?? He had Greek cuisine! Olive leaves with Feta Cheese, etc. and the Barbados posse looked at me aghast like I was a traitor. 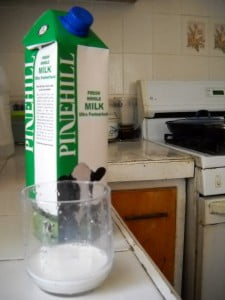 This leads me to my amazement and wry sardonicism at the way folk here are up in arms over new packaging and procedure for preparing Milk by the Pine Hill Dairy.

Here are some of the reactions over on facebook (I had to use my Gmail notifications to source these remarks as the originator of the debate removed the original thread, Tks to God 4 Gmail!);- “It’s not Milk any more but now a Milk Product.” or “It tastes different, also ultra treating apparently reduces the levels of some vitamins in milk, therefore its not as healthy as fresh milk. It’s an inferior product. Plus I’m told they no longer do the larger size cartons, so if you drink a lot of milk – you end up paying more as you have to buy more smaller cartons And I don’t like the spin – they’ve moved from selling a lovely fresh healthy product, to a over processed long life less good for you product and are trying to suggest this is a good thing.” Plus, I was invited to join the Facebook group “Pine Hill new milk is disgusting“, which contends that;-

“For all of you who think that
a) the new milk tastes horrible
b) we had no choice
c) wtf is with no 2 L packages anymore?”

"What to my wandering eyes did appear?" Clement C. Moore once penned, equally appropriate here - look at the blue box or carton next to the Italia D'Oro staffer very closely.... CLICK ON IMAGE FOR LARGER SHOT

To try and provide balance I sought twice to state IMHO that the new PHD is not so bad… Here is a response;-

“I read on the Pinehill page that Sophia {Cambridge} went on Brass Tacks and said the product is the same, only the packaging has changed. Now i didnt hear Brass Tacks yesterday but if that is true (the fact she said it, because even Pinehill admit it isnt the same product inside) her credibility has plummeted drastically!”

But that is the writer’s view, for me, I tried it and yes there is a difference but not so bad, I quite like it! In fact, when I was at Big B yesterday, I wheeled up the Dairy aisle and found a woman who was just staring at the new Cartons. When I walked forward to get some she then says, “I HEAR DEM TASTE BAD!” so I look at her and asked if she tried it out herself, but she just shook her head.

I said what I told the CBC Canteen posse years ago, if it’s unknown then there am I to see for myself, and she said in a schadenfreude way “IT GON’ GI’YOU DIARRHEA!” I gave a huge grin and said the only way I will know is if I try, so far no runny pooch up to my milking this story for what it’s worth… Go and get a carton, I like it and it’s not that different just has a longer shelf life – unless it’s all a ploy to allow businesses to import milk from abroad?

UPDATE – I went to the Bmex show at the ex-Sherbourne on Two Mile Hill (separate story coming soon), and had me a Frappe at Italia D’Oro booth like I usually do, and noticed how so many Bajans were gleefully ordering Espresso Frescantes and other iced coffee goodies, but guess what? The staff used the new 2% from PHD for all of the beverages and folks said not a word as they were none the wiser! This proves any discontent is all in the head!