Windies seal Digicel Series after making much ado about 141

West Indies sealed the Digicel Series 3-1 with a four wicket win over Zimbabwe in the Fourth Digicel One Day International at the Arnos Vale Sports Complex. But the previous sentence uses bare facts to couch an indiscipline display as senior batsmen made much ado about 141 runs. 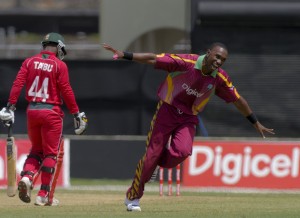 Before the run chase the Windies, principally through the cunning medium pace of Dwayne Bravo, had Zimbabwe down for the count at 88 for 7. Lacking the killer instinct, as they often do, and unable to restrain top scorer Elton Chigumbura, they relented to allow the visitors to get up to 141 all out. It was, by some distance, a modest and uncompetitive total in the normal course of things but with this Windies ‘normalcy’ can be a concept as foreign ‘levelheaded stroke play’.

They eventually crossed the hurdle but for the loss of six wickets – four of which were ludicrously needless dismissals. 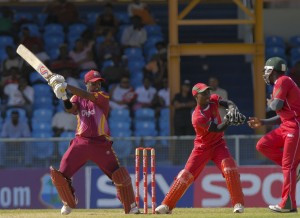 Narsingh Deonarine – who is incrementally establishing himself as the new Shivnarine Chanderpaul – remained not out at the end on a most responsible 32 from 68 deliveries and as the Windies limped to 142 for 6 from 34.3 overs after their Captain Chris Gayle provided fire and brimstone with a 20 ball 32.

After bludgeoning four fours and two sixes, Digicel-sponsored Gayle set his sights on the wide long off region for a third maximum. His priority was clearly to provide entertainment for the Friday afternoon spectators even at the expense of his wicket.

The mighty left hander did not hit the ball as powerfully as he would normally, and it was caught by Graeme Cremer for Greg Lamb to be the first wicket-taker for the African side. Gayle’s brief but electric innings was more evidence for those who argue that the captain is an entertainer first, batsman second. By then the score was 46, but it was only the 7th over.

Shivnarine Chanderpaul’s brief stay was uncharacteristic. He made 2 before he skied a pull to mid on off Chigumbura who Gayle had previously assaulted for 20 runs from his second over. Chanderpaul had already survived a chance to the butter-fingered Stuart Matsikinyeri at square leg. It continues to bemuse and surprise locals that Matsikinyeri, who has not registered a single score of worth all series long and who has dropped more catches than any other player on either team, continues to play ahead of Charles Conventry – a man who, until a few weeks ago, was the joint world record holder for the most runs in an ODI innings.

After Cremer outfoxed the Trinidadian duo of opener Adrian Barath (lbw for 25) and Denesh Ramdin – again batting at number 4 as new Head Coach Ottis Gibson continues to experiment – (also lbw for 12), Dwayne Bravo drove expansively to be caught a first slip for 6.

With victory three runs away Kieron Pollard (22) tapped by Timicen Maruma to be out caught and bowled.
A victory which should have been delivered on a glistening silver platter was sheepishly handed off in an unmarked cardboard box through the back door.

Incomprehensibly naughty strokeplay – now typical of the Windies batting line ups regardless of what coach or captain sets it – robbed the win of its sheen.

Deonarine must have felt as though he was in a land called déjà vu. As he had done in the Second Digicel ODI in his native Guyana – the left hander who is often mistaken in style for Chanderpaul, remained unfazed and assured victory but his innings benefited from some generosity by Jamaican umpire Norman Malcolm who twice made embarrassing blunders which are not likely to be favourably looked upon by his discriminating markers at the International Cricket Council.

First a stumping appeal was not referred to the Third Umpire Clancy Mack. It was a fundamental and inexcusable error in judgment. Television replays showed that Deonarine’s boot was on the popping crease and therefore should have been given out. Later television replays once again suggested that Deonarine nicked a ball to wicketkeeper Tatenda Taibu but the distinct deflection was not enough to convince Malcolm.

That was in the 22nd over, which was bowled by Prosper Utseya who also dropped a simple caught and bowled offer from Bravo.

While Bravo was rusty with the bat, with the ball he was sensational.

His ebullient right arm medium pace – delivered with telling variations of every kind – accounted for four wickets for 21 runs. He sent down a total of nine overs, two of which were maidens. It was a Man of the Match effort for which he was duly rewarded with a Blackberry Bold 9700 from Digicel, a medal and some cash which a man with a substantial IPL pay cheque will only see as pocket change.

Ravi Rampaul returned to form with 2 wickets for 21 runs from 8 overs while St Lucian all rounder Darren Sammy was once again frugal. His ten overs cost 24 and he took a wicket, as did Nikita Miller whose ten overs cost one more than Sammy.

Chigumbura bolstered the Zimbabwean innings with a thoughtful 42 as the lower order resisted following the top order combustion.

A target of 142 was as inadequate as the terminal of the ET Joshua Airport next door to the ground but had Umpire Malcolm been more alert and had Deonarine been adjudged out earlier on in the piece the run chase – even the result – could have taken on a more sour feel.

After a comprehensive thrashing of Zimbabwe in the Third Digicel ODI two days prior, this was a step back for the Windies. The Digicel Series is sealed and overworked players may have a day off on Sunday as the three men on the bench – Sulieman Benn, David Bernard and Darren Bravo – are allowed to have a romp.

Even in such circumstances victory should not come lacking certainty and conviction.