Alberta Whittle grew up in Barbados and moved to Scotland, where she is completing her MFA at Glasgow School of Art. She lives and works in both Barbados and Scotland and considers herself a PUREBRED MONGREL. The latest installation is at the Bridgetown Gallery, special debut Sunday 21 from 6:00 to 8:00 pm; regular days from 22 March to 3 April. Sat’s, Sun’s & Mon’s by appointment; Tues’, Thu’s & Fri’s from 11:00 am to 4:00 pm and Wed’s from 12:noon to 4:00 pm.

Papa’s got a brand new Funk

Alberta has undertaken residencies at Czech Republic & Scotland. She choreographs interactive installations, interventions and performances as site-specific artworks in public and private spaces, including at the Royal Scottish Academy and has exhibited in various solo and group shows in Europe.

Her practice is concerned with the construction of stereotypes of race, nationality and gender, considering the motivation behind the perpetuation and the different forms in which they are manifested. We are consumers of myths and Whittle enjoys assuming the role of mythographer. These myths can act both as weapons and as protection, a support for dominant power structures and a means of control of identity. 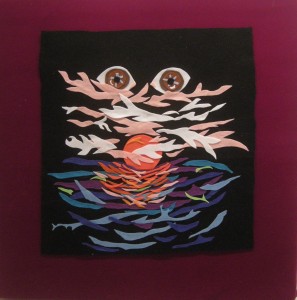 Her practice hopes to provoke the audience into making artistic judgements on taste. Thomas Hirshhorn’s discourse on how shrines, altars and arrangements of objects emerge, expand and erode has influenced her most recent installation. The assumptions made about kitsch, where it has to transfigure into something purer and less vulgar to be considered art is a source of fascination.

The installation, badmanabadman refers to living stereotypes of the black male body. Whittle mines images of bodybuilders, minstrelsy, religious iconography, hip-hop legends, historical figures and popular culture, to produce assemblages, which attempt to subvert gender and racial stereotypes. Whittle struggles to formulate a kind of hybrid collage strategy, through the acquisition of bits and pieces of visual information, striving to make sense of them. 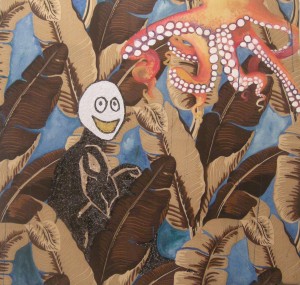 Brother’s gonna work it out I

Alberta’s assemblages become a deliberate pastiche of glamour, through the manipulation of decorative excess. Through inverting the disposable, she hopes to make something precious. Artifice becomes a device to create myths, where the illusion of preciousness and luxury is manufactured with cheap, accessible materials, such as felt, styrofoam, mirrors and fake gems.