The votes are in and final, and the winners have been notified for this year’s Carmichael Award at the Zemicon Gallery on Hincks Street.

James Gardiner, of Canadian firm Goldcorp says there have never before been as many votes as there was this time!

The public’s choice was Sheena Rose’s “Vroom Vroom Beep,” while the critics choice is a chapter in Mark Brown’s landmark art series, “Angels In Crisis.”

“Many people felt it was the best Carmichael show ever,” Curator Therese Hadchity confided, “I have truly enjoyed the variety and promise of all the works.” 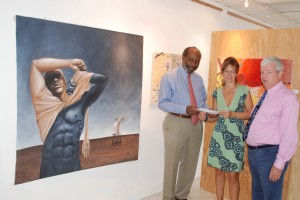 L to R: In front of one of Mark Brown's Masterpieces - Trevor Carmichael (for whom the award is named), Curator Therese Hadchity & James Gardiner of GOLDCORP, prominent Canadian firm operating as an offshore entity in B'dos

The Bajan Reporter congratulates all involved and urges Goldcorp or whichever relevant agency to assist in preventing the permanent loss of Zemicon to the Barbadian Arts Community.