St Kitts’ Department of Sport has opened another door for local basketball players to further their athletic and academic pursuits internationally.

Just recently, Director of Sports, Dave Connor revealed that he will head a team of nine players (chosen from various squads) and three officials on a one week tour of colleges in Florida, U.S.A.

The team leaves Thursday 5th November and will play their first game against Nova Southeastern University the following day. Then it?s on to Florida Tech to battle the crimson and gray Panthers men?s basketball team on November 07. The third exhibition game takes place at Flagler College on November 08, and the tour concludes on November 10 at Rollins College against a Tars Men?s basketball team looking to rebound after an 86-47 loss to Xavier.

Director Connor explained that the tour is a direct result of the annual Reach One, Teach One Basketball which is organized in part by his Department in collaboration with the Bird Rock Sports Club and other partners. 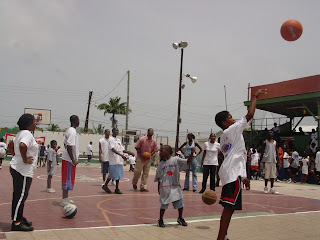 U.S. Coach John Spezia has been at the fore of the camp for three of the past four years. He uses his contacts as President of the National Junior College Athletic Association, Coaches Association to facilitate opportunities for local players such as the upcoming visit.

The local players will be scouted by the universities coaching staff and have an opportunity to earn scholarships, joining the likes of Dane Rawlins, Nashorn Maynard, Shamile Jeffers and Erasmus Williams Jr.

Mr. Connor stressed that in addition to showcasing the skill of local athletes, other aspects of St. Kitts and Nevis will be highlighted. These include the growing sport tourism offerings as well as the offshore specialist schools such as Ross University.

Plans to construct an indoor basketball stadium should help to ensure U.S.-based teams can come to the Federation. Coach Spezia has facilitated team travel to Antigua and said it is his ?dream? to see this happen in St. Kitts. He noted that he has made contact with a sports travel agency to gauge interest and explore potential opportunities.

Director of Sports Connor explained that Government?s significant contribution to the upcoming tour is being supplemented by contributions from Kittitian donors including Digicel, Lime, the St. Kitts and Nevis Olympic Committee, Carib Crafts and Graphics, O.D. Brisbane and S.L. Horsfords and Co Ltd.

He thanked all individuals and agencies that supported this college tour as well as four years of the Reach One, Teach One Basketball Camp.