When last we looked at this premium event, there were some basic observations… Good? Jewel Shannon’s lineup; Bad? No Media-ID after filling out accreditation – what was the point? Lovely? Ria Borman’s delivery between designers!

However, this is merely the tip of the iceberg… There’s still more to analyse and define, ok? For at least one more entry, too! 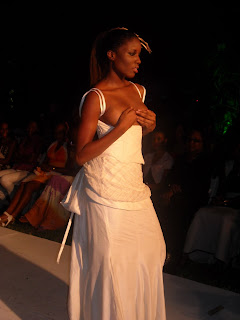 GOOD: Kimya (Say – Kim-Me-Yuh) Glasgow has seductive outfits for those who are daring, many guys wished one of the models returned at the end giving full applause, wink! (Familiar with Barbados, she’s a BCC Graduand of ’95) 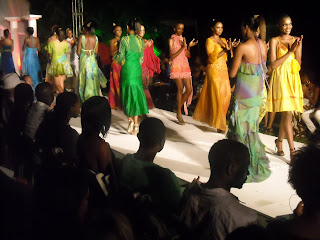 I noticed that she is a young, attractive full-figured Vincentian and asked why did she not cater to this niche rather than just entertain the slim set? She indicated she has not abandoned this concept and plans to look at it either next collection or next year whichever comes first.

BAD: Claudia Pegus. So many levels. Where do I start? BTW, if you visit her site most of it is erratic – rather like her presentation that night. 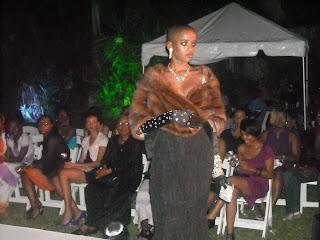 Incredibly, she kept Impresario Rodney Powers waiting close to ten minutes while she gussied up her posse for a Michelle Obama tribute. In order to make her hurry, there was a blank spot of close to 3 minutes of dead air. Like she cared… 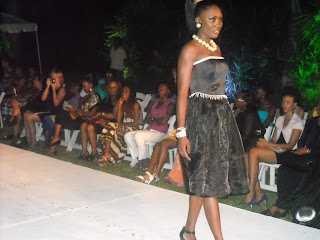 Then when she finally deigned to reveal her Hog Couture for the mass unwashed peons outside (Us, The Audience) she had an incredibly long and, after a while, boring recording of various soundbites concerning the US 1st Lady before the girls strutted out…

As for her display, it was reminiscent of a bunch of gaudy tarts on London’s Soho or Whitechapel prowling for their next trick. This completely grates against the innate simplicity of America’s First Lady! I mean, Michelle Obama PRIDES herself on buying an outfit from Wal-Mart or K-Mart and accessorising with some imitation pearls (But certainly not 20 strands as was the case that night) as a lesson on elegant frugality for her fellow US constituents.

It really took me by surprise, all of this kitschy glitz, so when I saw her backstage I asked her point-blank citing the very same frugal aspect of Mrs Obama… The designer’s excuse is if you’re touting a line you have to ‘glam‘ it, which is a different campaign than if you’re clothes are off the rack… Thanks for answering the question, NOT! 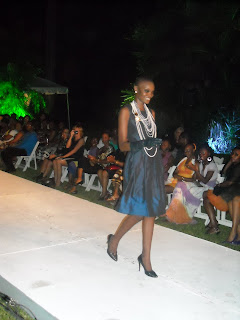 Nevertheless, shock of shocks when a white couple came up to buy some of her wares right there on the spot – if they’re decorators then you know I won’t be using them! Just no accounting for taste, eh?

LOVELY: I think it’s safe to say when Pegus’ nightmare finally woke up and slogged itself off the stage, everyone felt lovely, so toodles until next time or TTFN!