It was a historic night and historic moment in Atlanta, Georgia at the Georgia World Congress Center. Not only was it the first major event presented by the newly formed Centric (A network created by Viacom combining BET J and VH1 Soul), not only did the show do tributes to such legends like Chaka Khan, Charlie Wilson, L.A. Reid and the late great Michael Jackson, not only is this the first staging, after a tow year hiatus of the annual event, but this was the first time that the prestigious award ceremony had included the category of best Reggae artist. As a matter of fact the award for Best Reggae Artist was the first award given out.

The nominees for this category were strong contenders. Tarrus Riley a winner of such awards as album of the year, song of the year and new artist of the year in other award ceremonies. Tarrus Riley, son of legendary singer Jimmy Riley and now the prot?g? of legendary saxophonist and producer Dean Fraser, has been seen by many as a wonderful addition to Reggae music through his music, voice, lyrics and performances. Ziggy Marley needs no introduction; he is an international superstar that has been providing quality Reggae music and performances for decades, as the eldest son of the King of Reggae music Bob Marley he has won probably every prestigious award that a musician can win. Movado is currently one of the most popular artists in the Dancehalls of Jamaica and around the world, the Dancehall artist has crossover and underground hits that have been chart toppers for the past few years. Serani has produced and been a musician on many major hits; recently he became a vocal artist and has enjoyed several hits as a vocalist. The Wolmer?s alum currently enjoys crossover success with two of his hits and has recently dropped an album ?No Games?. 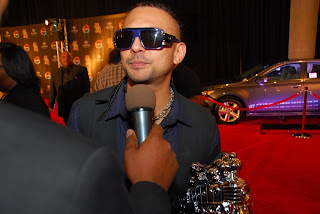 The tweets and social media messages were flying all over the internet naming the nominee though that walked away with the prize. He is actually another Wolmer’s alum, the multi-platinum selling artist, Sean Paul! Sean Paul over the past seven years has easily become one of the most recognizable Jamaican artists worldwide scoring hit after hit in the mainstream landscape. Paul showed his appreciation on winning such a prestigious award and said it was a good thing for Reggae to be recognized, something that is long overdue. His latest album ?Imperial Blaze? is his most successful international effort to date, charting number one in several countries around the world. He has had a very successful tour in different countries and continues to be an ambassador for Jamaican music. Paul has stayed committed also to using Jamaican producers who are very relevant. The next single off of his album will be ?Hold My Hand? featuring Keri Hilson who was also nominated for three awards.

The Soul Train Music Awards was a star studded event and well produced. Production was done by Sunseeker Media. A Haitian American producer from Sunseeker was the show producer of the 2009 Soul Train Awards Red Carpet Show. Junia Joseph, the producer, ran a tight ship as she skillfully executed this extremely intricate and formidable task. When asked about the inaugural inclusion of the Best Reggae Artists Category Joseph said that, ?I feel that the inclusion of the Best Reggae Artist category in the 2009 Soul Train Awards speaks to the influence of Caribbean music and culture in the world of mainstream music and culture. Credit must also be given in large part to Centric and its programming, which in its prior form always maintained a healthy dose of Caribbean rich programming content.?

Congratulations to Sean Paul and all the nominees for the Reggae and other Categories of the Centric Presents: Soul Train Awards 2009. It is a positive that the long overdue recognition is being given to Reggae music; it opens opportunities and doors for the Caribbean culture. The taping of this historic occasion will be aired on Centric on November 29 2009 it will show performances by Toni Braxton, Trey Songz, Erykah Badu, Robin Thicke, Fantasia, Ryan Leslie, Raheem DeVaughn, Karyn White, Boyz II Men, Ledisi, Chico Debarge, Angie Stone, Brian McKnight, Ginuwine, Melanie Fiona, and Johnny Gill. The broadcast will be hosted by Academy Award-nominated actors Terrence Howard and Taraji P. Henson. So until next time LOVE, HAPPINESS and SOUL!

NOMINEES AND CATEGORIES FOR 2009 SOUL TRAIN AWARDS SHOW BELOW

Entertainer of the year
? Michael Jackson