Marcia Griffiths O.D. will be honored by Jamaicans who reside in South Florida on her birthday November 21st for her outstanding contributions to the development of Jamaican music over the last forty six years.

This event will be staged by ?CRM Multimedia? at the ?Grand Ballroom Of Sunrise? 7100 West Oakland Park Blvd. and will be hosted by Jamaican radio personality ?John T? of Radio WAVS 1170 a Caribbean oriented station in Fort Lauderdale.

The showcase will include a host of Jamaican artists and celebrities such as D.J.?C-Roy the Entertainer and Rainbow disco who will provide the music that will feature the entire discography of Marcia from her early Studio One recordings, as a part of the I Three?s and with Penthouse Records. 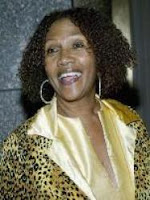 Dubbed the Empress of reggae music, over the years Marcia has established herself as Ambassador, trail blazer and an I-con of Jamaican music. She began her music career in 1964 working with the late Byron Lee while recording for Coxsone Dodd?s ?Studio One? Records.

Marcia has shared centre stage with R&B greats such as Carla Thomas, Betty Wright and Ben E. King in the 1960s and 70s when the Carib Cinema was the official venue for international shows and memorable command performances, from the likes of Sam Cooke, Fats Domino and Nina Simone, just to mention a few.

Marcia?s first recording was ?Land Of Love? for ?Studio One? and her first hit singles were ?Words? recorded with the late ?Free I? and ?Feel Like Jumping? which was written by Bob Andy. Her first album ?Marcia Griffiths at Studio One? also featured the first collaboration with Bob Andy on a song titled ?Always Together.?

Other hits over the years includes ?Piped Piper? with Bob Andy, Dreamland, Young Gifted And Black, Stepping Out in Babylon, Deep In My Heart, Peaceful Woman and ‘Electric Boogie‘ an international hit written by Bunny Wailer from which the dance ?The Electric Slide” became an international dance craze. These are just a few of the many hits that Marcia has recorded.

Thus the name Marcia Griffiths has always been associated with excellence, she was a member of the group ?The I-Three?s? that included Judy Mowatt and Rita Marley who provided background harmonies that revolutionized the sound of Bob Marley and the Wailers.

Marcia was awarded the Order of Distinction in 1994 and the Prime Minister Award for Excellence in 2004 for her outstanding contribution in the field of Jamaican music. Marcia Griffiths in command performance at the ?Grand Ballroom of Sunrise? in Fort Lauderdale on ?Thanksgiving? weekend Saturday November 21st is a Jamaican event that Jamaicans in the Diaspora look forward to being a part of.