When I was transistor-high to a nanobyte, boys did not have dolls – we had “Action Figures“! There was the real GI Joe with hair, operating on the ground, and bendable Matt Mason for the stars.

Do you remember the mint condition Mego 12″ tall figures mentioned in 40 Year Old Virgin? Um, I had the full set plus a 6 Million Dollar Man from Harrison’s No. 1 Broad Street (I can hear one of my Facebook pals asking if I need cryogenics like Tom Cruise in Vanilla Sky)… Here in Barbados, many folk – mostly ladies – have become very fascinated with either Sookie Stackhouse’s romantic triangle or the Cullen Saga in Washington’s northwest or both! To top that off, action figures are regaining popularity among a new set of bloodsuckers, Mattel and DC Comics, the victims are us – readers, viewers and the like… 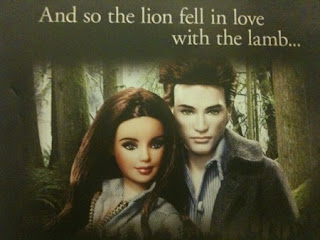 Even Taylor Lautner?s Plastic Doll Has Abs! – Ken better hit the Dream House?s gym ? because Mattel is releasing a Jacob Black doll and he?s only wearing cutoff jeans? not to mention, he?s sporting some major plastic abs. AccessHollywood.com has confirmed that Taylor Lautner will be immortalized in Mattel?s ?Twilight? Barbie line. The Jacob doll ? which Twi-Hards will have to throw down $24.95 to play with ? doesn?t hit shelves until February 2010. The doll?s release is timed with the DVD release of ?The Twilight Saga: New Moon.? We can only imagine the millions of Twi-Hards doing unspeakable things with the already released Bella ?Twilight? Barbie doll ? or even Barbie herself ? if she?s lucky!

What does one do? Bay at the moon? Hiss like a Crucifix has been brandished? Edward looks like Ken with GI Joe hair and a lighter complexion, while Bella is a Barbie with deep auburn tresses… Not to be outdone, DC Comics has the franchise for the main characters of Charlaine Harris’ series about a telepathic waitress and her two undead paramours. Rather than action figures, dolls or whatever, DC has created what they call Busts while I prefer Statuettes, very realistic here;-

Each bust is sold separately, packaged in a 4C closed box.

Twilight for me is Mills & Boon with enlarged canines, whereas Sookie, Bill, Eric and the residents of Bon Temps are a blend of romance, mystery, serial and soap opera with action/adventure.

Tried hacking Stephenie Meyer but sorry, the saccharine was worse than garlic! Charlaine’s characters are alive – whether they live and breathe or not – and it makes you really THINK if such creatures exist.

I will soon be doing a review on the first two books in the Southern Vampire series, watch out!