Last weekend Atlanta was treated to a special event, the Atlanta stop of the Rasta Got Soul Tour at the Center Stage. This tour was being used by Buju Banton to promote his latest release, Rasta Got Soul and Gramps Morgan was promoting his latest release 2 Sides of my Heart. The former CD being very soulful, using a lot of mature and traditional Reggae beats, featuring a few songs where Banton collaborated with such artists as Wyclef and Bunny Ruggs of Third World Fame. 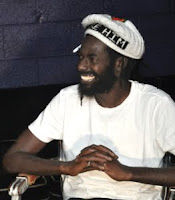 The Rasta Got Soul CD contains themes of Unity, Love, Peace and Panafricanism. While 2 Sides of My Heart VOL 1 is more Lover?s Rock with themes that normally fit that genre.

Currently Buju Banton holds the record for the largest turnout for a Dancehall artist in Atlanta. So it was no surprise that this stop was greeted with high anticipation. There were reports though, that various stops along the tour had been canceled because of Gay groups that had protested against the artist, specifically against a song written in 1989 and released in the US in 1992, “Boom Bye Bye“. The twenty year old song (when Buju was 17) filled with figuratively hyperbolic lyrics that spoke to anti gay sentiment that swept Jamaica during the eighties had been used as the main reason for the protests. It was reported by the Southern Voice that there would be an attempt to form a protest.

Other concerns included the time and venue of the event. A majority of the Reggae concerts that occur in Georgia occur in the Stone Mountain and Decatur areas (roughly 20 to 30 minutes east of Center Stage) where it is estimated that up to 80% of the Caribbean population reside. Most of those concerts normally have an artist coming to the stage after 3:00 am and as such Reggae lovers in Georgia are normally used to arriving at the venue after 2:00 am. This concert was slated to start at 9pm.

Concert night came, Center Stage doors opened at 8pm on the dot, a few people started trickling and sitting down in the Center Stage. Soon Changez sound started playing music, and to the pleasant surprise of many, large numbers started coming in, by 9:00 the floor was packed with people dancing and people were out of their seats. By the time Changez started winding town to get ready for the show at about 10:00 Center Stage was 3/4 filled with patrons dancing and enjoying themselves.

MC Jason SkyWalker of WRFG radio 89.3 FM came to the stage and brought on the Shiloh Band, the band that Buju had been touring with. The first acts were Angel Shalome followed by Nicky Burt who blessed the crowd with sweet vocal cords as they entertained the crowd with strong Reggae music.

Gramps followed soon after. He started off by giving a quick medley of some of his hit songs that he sang with Morgan Heritage and then he went into material from his new album.

The audience listened attentively as Gramps? strong baritone voice carried them on a musical odyssey. Gramps closed with a song that became popular in Atlanta when he sang it at the funeral of a very popular member of the community earlier this year, the member was Marc Stewart, and the song ?Wash the Tears?.

Then it was time for the headliner, Buju Banton, he burst on the stage with a flurry of energy, immediately electrifying Center Stage. He started off with a string of uptempo hits including a medley of his early nineties hits, such as ?Browning?, ?Black Woman? and ?Deportee?. Setting the crowd into a dancing and jumping frenzy. He also did the more spiritual hits such as ?Destiny?, ?Till I?m Laid to Rest?, ?Not an Easy Road? and the song that always turns the crowd into a choir ?Untold Stories?. Buju probably brought the spiritual level in Center Stage to its highest level when Gramps returned to the stage and together they performed their popular rendition of Psalm 23.

Buju Banton reeled off many of his other hits such as ?Driver? ?Murderer? and ?Too Bad? and still had time for songs off of the Rasta Got Soul album. On Stage he exhibited energy, and a veteran?s control of stage and audience. His vocal execution and delivery was flawless. Buju was entertaining, inspirational and even educational. He reminded us that if the ?The pressure gets hard, hold up your head? and that the only ?way things will get better is when we stop murdering one another?.

A little after 12 midnight Buju exited the stage, with the crowd still in a frenzy. Patrons wanted more, but the demands of the tour were more pressing and Buju had to end his performance. Changez sound started back up and had patrons danced till after one when the venue had to shut down. Both artists did stick around though for autograph signings and picture taking with the fans.

The Atlanta Stop of the Rasta Got Soul was a success. Reviews from patrons were all positive. According to Yahrdana Baskerville who won tickets from Carib Life Central “I had a wonderful time…I loved it…you could just feel the love and the energy in the room…it was awesome…it was my first time in that venue…and I really liked it…I really enjoyed myself…I couldn’t stop dancing…Everyone was great…I cant wait for the next one?. Another patron Marsha also said that ? — the show was wicked to the max! The vibes were out of hand, there was a party in the middle of the floor b4 the performers came out (and) the music was nice! Buju and Gramps really mashed up di place!? Other patrons were pleased to see a show that started so early and ended at a time where they could do other things if they wanted to, or go home at a decent time if they wished to do something in the morning. To top it off there was not a protester in sight.

Buju Banton and Gramps Morgan with Angel Shalome, Nicky Burt and the Shiloh Band executed a memorable show that people will be speaking about for a while. They truly gave showed Atlanta that Rasta Got Soul, and Heart too. Center Stage worked with Carib Life Central, WRFG radio 89.3 FM, The Whatz Happening Email list and Atlanta Reggae in the execution of this event.