In June 2009 the Barbados Chamber of Commerce and Industry signed a Memorandum of Understanding with the Barbados Youth Business Trust ? which is now in its 13th year of operation. This signaled a commitment from the Chamber to invest in the development of entrepreneurship and the mentoring of young people so to create better Business people for generations ahead.
The Chamber again partnered with the BYBT as they launched their arts and craft exhibition at Satjay Mall in Bridgetown precursor to Global Entrepreneurship week to be held from 16th to 20th November. Jewellery both Natural and Semi-Precious, along with Art of different styles, and Event Planning for work or play are just some of the businesses on show at the event. 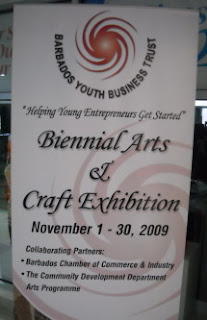 BYBT?s Executive Director Marcia Brandon says the Trust continues to develop this nation?s young artist entrepreneurs with the intention of elevating them to positions of community leaders, creative catalysts and artistic revolutionaries. In other words BYBT sees these young entrepreneurs as artist-citizens.
They want to assist the artist entrepreneurs to become ?Intellectual entrepreneurs? who view their minds as sources of inspiration and change, thus bringing about economic and social development in our society. 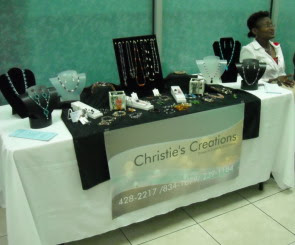 Chamber member ? Gregory Hazzard of Mahy-Ridley-Hazzard Engineers ? and Chairman of the BYBT?s board, sees entrepreneurship as a means of preventing financial hardship even though harvesting the results of those efforts is not instantaneous. 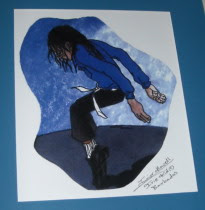 While addressing persons present at the launch, Mr Lalu Vaswani, part owner of Satjay Mall and Chairman of the BCCI?s Bridgetown Revitalisation Project, stressed the importance of creating opportunities for success and having a vision, citing an instance where one of the occupants of the Mall started his business in what used to be a garage. Within the space of eight years, the business eventually expanded to three branches, with the City outlet now occupying a space of one thousand square feet at Satjay. 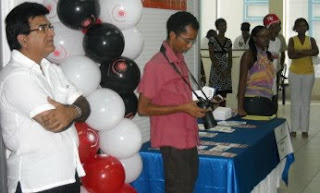 The Bridgetown Revitalisation Project Chairman also said this demonstrated that when one nurtures one?s enterprise, then massive growth is the reward if one is patient. He sees these entrepreneurs as part of the redevelopment of the City, since if Bridgetown is to become a 24/7 hub of activity, it will need strengthening in many areas including heritage tourism, commerce, entertainment and culture which means better chances for new and young businesses to flourish in the process of reinventing the City to be more attractive for locals and tourists alike at any time of day or night.
The exhibition continues until November 30th and it?s situated on the top floor of the Mall which is on Victoria Street behind Cave Shepherd.