Andre Woodvine is excited to announce that after over a year of hard work his new CD “Fix it on Monday” will be in stores here in Barbados on Thursday November 12th!
“Fix it on Monday” will also be on sale this Saturday November 14th at the 39 steps Wine bar in Hastings where he’ll be performing with guitarist Willie Kerr and the enchanting vocalist Eliana Marcenaro.
Are you interested in hearing a sample of this cool Caribbean jazz?
Click on this link http://www.myspace.com/andrewoodvine to hear two selections at Myspace! 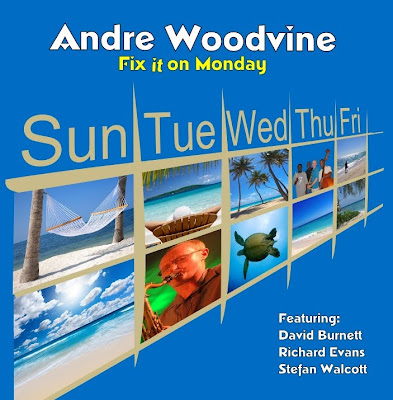 Fix it on Monday was recorded live in Studio Vine with pianist Stefan Walcott, bassist Richard Evans and drummer David Burnett and of course Andre on both saxes and flute. The CD features nine new original compositions, songs that he’s been performing here in Barbados and abroad over the past two years or so.
The album is on it’s way to CDbaby.com for international fans and will soon be available for digital download on all the major legal online music stores.
As always, Andre also accepts orders directly, just e-mail him!