I have been riding on cloud 29 since attending Gramps Morgan and Buju Banton concert on Tuesday night October 20, 2009 at Dallas?s Palm Beach Reggae Club. This dynamic duo was brought to Dallas by Houston?s own DJ SuperGold.

Gramps (a fraction of the Morgan Heritage fame), is currently on the Buju Banton ?Rasta Got Soul Tour?. 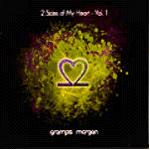 First I would like to thank Gramps’ camp; Anthony Alexander for coordinating the meeting between myself and Gramps. I apprecilove all your effort; as it took some coordinating. This in itself shows total dedication on your part. Large yourself up! The results were a wonderful extraordinary experience with Gramps Morgan; this included the On Air as well as the live interview. We?ve had positive vibes from our listening audience globally, regarding the interview as well as the new CD. Give Thanks!

And it goes something like this – Gramps Morgan from a Woman?s perspective:

I reach the event early to meet with Gramps and do a little one on one interview. Ladies my heart was going thump, thump, thump. I was already hyped up from Carmelita?s (IrieVision Worldbeat TV San Francisco) report on Gramps from their visit a week prior.

I was not disappointed as Gramps is an awesome individual, not only does he fit the eye candy mode, he is deep and I do mean deep! Gramps entices the women ?to get off the heartbreak bus and take a ride with him to heaven?.

Gramps say?s he believes in the ?oneness? among mankind. He is versatile and moves smooth and easy through the roots of reggae.

Well when Gramps took the stage at 11:30 pm, the crowd was kind of shell shocked. I too was feeling shell shock; it is kind of confusing to the mind to see Gramps perform solo. For years we have only associated him with Morgan Heritage as a group. That?s why at first it seemed weird to see him on stage without; Lukes, Mojo, Peter and Una. It took only a moment though to come to the realization that this man is just fabulous with or without the group. It just takes a moment for the mind to process the change. (smile)

So as I observe the crowd and see at first they were just standing there, swaying a little through the first song, maybe move a little more during the second song;

you could see from their expressions that they were still perplexed to see Gramps Morgan without the Morgan Heritage band.

By the third song, it was on!! it was as if Gramps burly voice broke through and opened up a can of whoop butt and said enough is enough; rock reggae with me from A-Z. Not only did Gramps amp up the volume vocally, so did the crowd. The screams from the ladies and the bop, bop, bop from the men almost drowned out his vocals. It is safe to say, the people got on the Gramps Morgan Reggae Train and road all the way with him as the conductor to the very end. Man it was a magnificent move, Gramps is a good roots singer, however, it is when he unleashed his lovers? rock sounds on the crowd, the lights were OUT!!!!

Every cell phone camera in the building was up in the air, either taking pictures or videoing. The men were taking control of their women as Gramps really into the performance, moved to the end of the stage and did a Marvin Gaye move with his body, the ladies just went mad! He further entices the ladies by saying ?Hush -come into his arms and stay strong?. This pumped up the volume again and the women in the audience were screaming like they were at a Rock concert.

Hey, I was just stunned silent from the crowd?s reaction. I have witnessed many concerts by the Morgan Heritage Band; never had I seen Gramps perform in this way. All I can say is what a treat!

Hush Gramps, you know you drove the ladies wild!!!! His performance was nhing less than a masterpiece in motion.

From the words of Gramps Morgan ?Get off the heartbreak bus and take a ride with him to heaven?. People he is deep and he totally, unequivocally tore up the place, in Dallas this night!!!

Listening to Gramps is like looking into the mirror at a combination of singers such as: Beres Hammond (holding tight on the reggae lovers? rock) and Barry White (who held tight the smooth R& B lovers style). Yes I said Barry White (smile) ? on the Song ?Hush? he is so suave, you would think to close your eyes and hear Barry White say ? yeah Baby! He has the raw sexiness of Marvin Gaye and the Roots ness of Dennis Brown.

It?s just uncanny, you will have to get the new CD ?2 sides of my heart? and see for yourself.

Like most wonderful Jamaican Artist, Gramps has no problem moving through a range of vocals, he is certainly a master in his Soul/Rock/Lovers/Reggae domain. It is refreshing to see an Artist so versatile that they are comfortable, smelting the sounds R & B, Soul and Roots Reggae, fused with sweet lovers? reggae Jamaican style.

I encourage you all to run not walk to pick you ?2 sides of my heart?. I received it last week and it?s been a constant music to my ears. It?s a great piece of work and you will love it over and over again. It?s just that good. Trust me! After all Darlins? I am the Queen, Reggae Radio that is. The solution to your reggae needs on Wednesday nights. LOL