A top health official on Nevis described the response to the first of weekly Cuban eye care specialist?s clinics at the Alexandra Hospital on Wednesday as overwhelming. Permanent Secretary, Ministry of Health in the Nevis Island Administration Mrs. Joslyn Liburd, told the Department of Information on Friday, that the first clinics held by Ophthalmologist Dr. Francisco Nunez and Orthopaedic Surgeon Dr. Cruz Mendez had seen a combined total of 29 patients. ?Twenty five people turned came to see the Ophthalmologist but three had already had appointments with the existing eye care programme coming in two weeks and 11 more came for the Orthopaedic clinic,? she said. Mrs. Liburd also announced that Dr. Mendez was satisfied with the available equipment at the Hospital and after the first clinic had one patient scheduled for surgery. The Health Official also noted that the Eye Doctor had made arrangements with Dr. Ashley Frank of the Nevis Optical Eye Clinic in Charlestown for patients who required glasses to correct their vision. 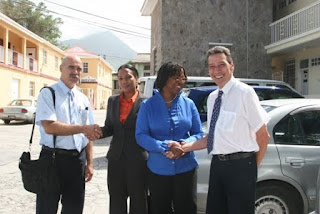 During a recent interview to announce the service offered by the Hospital, Mrs. Liburd explained that the initiative was a collaborative effort between the Ministries of Health on Nevis and St. Kitts thanks to the good relationship they have enjoyed in recent years. She said the service of the Orthopaedic Surgeon was new. In the past patients from Nevis received attention from doctors who visited the island in a private capacity at high costs. The weekly services of the Ophthalmologist would complement an existing eye care programme which was conducted by visiting Ophthalmologists. They held free clinics at the Alexandra Hospital every year in November and April.