While the lyrics of the song are tongue in cheek the targets are unmistakable and has deftly connected. Ikaya, who is by no means afraid of starting a lyrical confrontation with any artiste, male or female, says: “The song is not really, aimed at anyone one in particular, it’s just an answer to some doubters who have been whispering. It’s a warning to anyone who decides to step up as my lyrics are caustic and will burn anything that comes too close.”

Clean-Up, which was produced by Skatta for Out-A-Road Records, is already burning up the airwaves. The song prods several female artistes including Macka Diamond and Spice, as a line in the song says: “Mi just saw dem off like Macka caw dem naah no Spice … 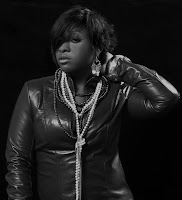 Skatta Burrell thinks that with Ikaya he has found the gem that dancehall has been searching for. “When I heard the lyrics for the song, I thought the rhythm was the perfect fit and that the song would be a big hit for Ikaya. It’s not often that you find a female deejay that can sing, deejay and feel comfortable doing both; blending wit, humour and hardcore lyrics in one. Any deejay who plans to answer Ikaya should be warned that she already has the lyrics ready for whatever and also has several other tunes in her arsenal that can only be released in a lyrical war. She is ready!”

Clean-Up takes no prisoners and on a tight punchy track is reminiscent of the old dancehall days when witty metaphors ruled the ‘ones and threes’ and music did not have to be overtly slack to send its message. Following in the footsteps of her idol, ‘Mumma Saw‘, Ikaya has definitely hit the ground running as she seeks to Clean-Up the music.