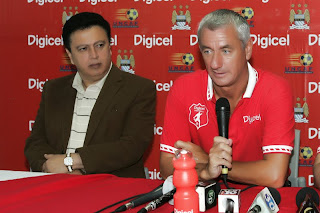 are gearing up for the last few remaining days when they spend one week’s training at Manchester City?s Academy under some of the best football coaches in the English Premier League.

The footballers – from Costa Rica, El Salvador, Honduras and Panama – have spent the last two months training hard to increase their fitness levels in preparation for the one-week training camp which kicks off tomorrow Monday, October 5th.

Oscar Salas from Honduras said of the upcoming trip: ?Not only was I honored to have been picked from so many footballers in Honduras to train with Ian Rush in the Digicel Kick Start Clinics, but to be selected to travel to Manchester and spend one week training at Manchester City?s Academy is a dream come true. I plan on making the most of my time in Manchester City to make sure that by the end of the week, my game will have improved significantly and I will have impressed the coaches.?

Jose Alberto Mora Mu?oz from Costa Rica said: ?It has been my dream to become a professional footballer and play with a club in Europe and I?d like to thank Digicel for giving me this opportunity. I still can?t believe that I?m going to be getting on a plane in to travel to Manchester to train with such a great club as Manchester City. I?ve heard great things about Man. City?s Academy and its coaches and I?m looking forward to learning as much as possible and hopefully meeting some of the senior team while I?m there.?

The six footballers are now in Manchester where they will spend five days training with the Academy coaches and taking part in a host of activities designed to give them a full understanding and appreciation of what life as a professional footballer is like.