In front of an enthusiastic crowd of over ten thousand fans at the Kaiser Sports Ground in St. Ann, a host of West Indies star cricketers past and present ? joined by the world?s fastest man, Digicel-sponsored Usain Bolt ? put on a great day of cricket entertainment in aid of select schools in the St. Ann and Kingston areas.Organised by West Indies big hitter and Digicel Brand Ambassador, Chris Gayle, the one day tournament saw the likes of Digicel-sponsored Ramnaresh Sarwan and Jerome Taylor joined on the pitch by cricket legends, Courtney Walsh and Curtley Ambrose ? and a host of other cricketing stars from across the region. 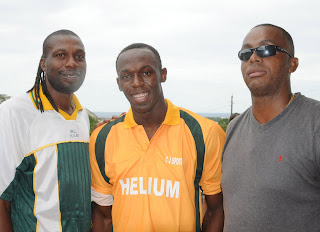 As the main sponsor of the one day event, and the biggest supporter of cricket across the region, Digicel was on hand to ensure that the vibes were good with lots of fun, entertainment and phone and credit giveaways.Highlights of the day included Usain Bolt smashing one of Chris Gayle?s deliveries into the top floor of the pavilion for six and then later going on to bowl him out ? bringing the excited and jubilant crowd screaming to their feet in the process. 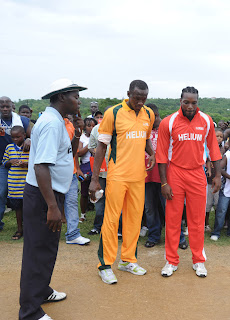 As the cricket extravaganza came to an end and night set in, Chris Gayle commented; ?Today was a really good day. I am delighted that so many people came out to enjoy it ? and that we were able to do something good in the process by using the proceeds to donate much needed sporting equipment and computers to select schools in the St. Ann and Kingston areas. I must also give thanks to Digicel for its support and to all of the cricketers past and present who so generously gave their time for a worthwhile cause. I?m looking forward to working together on more of these kinds of initiatives in the future.?Kieran Foley, Digicel Group Director of Marketing, said; ?As proud sponsors of West Indies cricket, we?re always looking for ways to give value back to our customers ? so it was great to see so many people out and enjoying a great day of cricket. All of the guys on the pitch ? and of course Usain in particular ? delivered some memorable cricket moments and the crowd loved every minute of it. We are delighted to have been a part of this fantastic initiative and would like to say thanks to Chris and all the players for a job well done.?