BARP?s Concert Memories are Made of This – Frank Collymore Hall with Carlyn Leacock, etc. 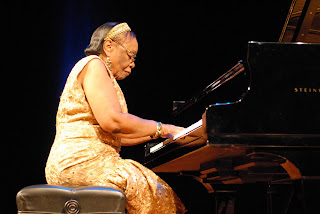 A plethora of diverse talent and entertainment awaited those who were at the Frank Collymore Hall on Saturday October 17, when the Barbados Association of Retired Persons (BARP) held their biennial concert entitled “Memories“.

Sold out days before, those lucky enough to be there had a spectacular experience. The evening started promptly at 7 p.m. with the national anthem, after which the audience was serenaded by the combined vocal talents of the BARP chorale under the direction of Michael Gill and accompanied by David Corbin and Erwin Brathwaite. The harmonious, sweet and powerful voices of its members filled the hall while taking patrons on a musical journey down memory lane. 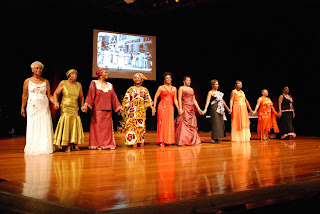 The audience was then rendered speechless with laughter and admiration for 95 year-old Joseph Graham who amazed and entertained them with his “speechifying“, filled with wit and verbal gymnastics. Cecil Norman Archer delivered a self penned poem in tribute to late president of BARP Kathleen Drayton entitled “That Smile“, which touched the hearts of everyone present. Glyne Bryan then took to the stage to charm the audience with the sweet sounds of his flute, accompanied by Harrison Williams.

One of the highlights of the night was the multiplicity of talents displayed by Maizie Barker-Welch who performed in a comedy sketch with Patrick Maxwell,demonstrated her piano playing skills and, as one of the ?Fashionistas, her ability as a catwalk model. The show continued with Senior Athlete Leroy Straker on guitar performing a folk song medley with patriotic themes. Soon after, the BARP ladies delighted with two fashion shows, the first of which was a comedic send up of fashion ?gone mad? followed by a procession of exquisite outfits elegantly displayed. Clem Kurtis took us back in time on a smooth and soulful journey with his medley of Mototown hits leaving the audience spellbound.A change of pace came when Grace Pilgrim give an impressive reading of the poem “Just What You Meant?, written by Nan Peacocke and dedicated to Kathleen Drayton. Grace?s diction and tone were perfectly suited to the emotional piece. 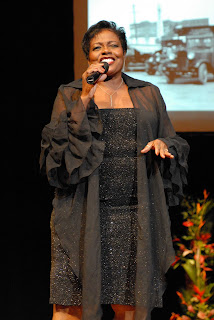 Lauretta Hackett accompanied by drummer Charles O?Dell gave a stirring African performance of ?Look for your God?. Following this unique rendition, Ken Farrell and Montege Deane-Bowen delivered a visually impactful cha cha cha dance captivating the audience as they weaved magic with their sensuous steps on the stage. 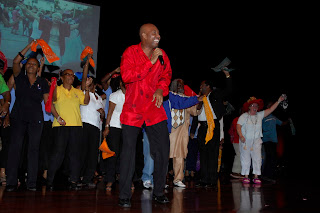 The show?s spectacular closing segment featured three special guest performers. First on stage was Ricky Brathwaite, who filled the air with the unique sound of his trumpet. Next up was singing sensation Carlyn Leacock who stopped the show with her soulful and powerful vocals, having briefly handled a footwear ?malfunction? with ultimate professionalism. Red Plastic Bag brought the event to a musically vibrant and colourful climax with his winning calypso “Something’s Happening” bringing the entire cast of over 100 performers back on stage for the curtain call.

Special mention is to be made of The Genesis All Stars who performed an impressively choreographed line dance routine to an RPB calypso, Tessa Kerr who played the piano with great expertise, while David Gittens, Charles O?Dell and Company rendered ?Mammy Blue? to Ukulele and Guitar. The hilarious Dame Priscilla Ermondtight was accompanied by her equally mad accompanist, Duke Ferdinand Fairface, in a musical melody entitled ?The Chocolate Soldier?. Thanks are due to Master of Ceremonies Patrick Gollop, as well as to DB Productions who handled the stage and lighting superbly, and Dr. Karl Watson who gave permission for the use of many of the images which formed the backdrop to the entire evening expertly compiled and projected by Merville Lynch.

The 2009 Barp concert “Memories” was definitely a rousing success and will beremembered fondly by all those who attended.