Everyone knows Hollis Urban Liverpool as “Chalkdust,” the nickname due to his other profession, an oversimplification of being a schoolteacher… that of a Professor at the University of Trinidad & Tobago, he does not even say he writes songs, he composes ‘academic papers‘ as the twin-island academic refers to it. 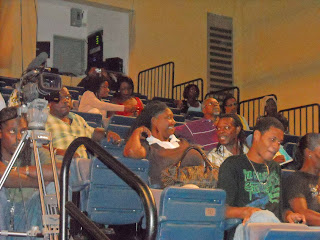 The Errol Barrow Centre called his lecture “Calypso & Crime” but I think it more fair to say the purpose of his speech was to show how Calypso as Social Commentary is just as an effective tool in analysing societal ills and offering solutions as any Sociologist.

He opened his talk in song using Sparrow’s 1961 classic, “Royal Jail” to illustrate how crime has shifted from fists to knives and now the use of guns;-

Constantly he urged his audience to sing along when he did, but alas, Bajans being how they usually are seldom did – myself doing the most. Whether I knew the song or not, probably since I was born in Trinidad although now a naturalised Barbadian.

Dr Liverpool made sure to emphasise how Barbados has it easy right now when compared to other islands as it relates to crime, he cited how Trinidad & Tobago this year have shot up to about 300+ deaths for the year so far and most of it in the last four days alone – to the effect of 15 murders a day!

He went on to note that while many Soca practitioners may touch on these topics, nevertheless no Government in any territory here has implemented policies or legislation to handle or deter such incidents simply based on the input which has been provided by this ancient and venerable artform. 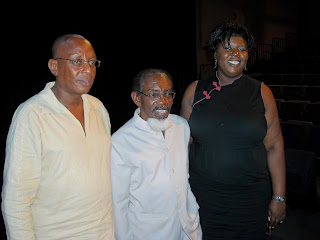 In the seven-time Kaiso Monarch’s view, Calypso is as just a potent a tool in assessing problems as any Social Scientist – he poses that by criminalising certain acts entertainers sought to prevent more crime and to assist victims.

He drew reference as far back as 1901 with Inventor, 1947 to Attilla and again Sparrow with “Ten To One” of 1967. He also shot forward three decades to Luta’s commentary when school haversacks no longer held books but were arsenals of war. Even looking at child abuse in the 40’s during World War II, the Associate professor reminded the audience of a lighter look at Crime with “Chicken Chest“;-

Unfortunately, calypso may do too good a job at disguising the plight of certain situations – he drew on “Rum And Coca-Cola” and “Mariann” as being too clever in hiding references to rampant prostitution.

In 2001 there were 17,133 incidents of serious crime in the twin-island republic, in 2004 – 160 murders were due to gunfire or gunshot wounds; and a special report from the IDB in 1998 believes not enough jobs and too much beer led to crime spiralling upwards.

Dr Liverpool then cited Creole in 1965 with”Don’t Jealous Them,” and in 1973 he drew reference to Smiley’s “Negro Man” singing on similar topics. Chalkdust is of the view that in every island right after their respective anthems, children should be made to listen to Sparrow’s “Education A Must,” this was in stark contrast to Bally’s 2002 warning on illegal drugs and Lord Leveller looking at jobs in 1966.

Chalkdust also referred to himself when he took a lash in 2007 at Kamla Bissessar-Persaud for her limited Education policies, and he reminded the crowd when Scrunter in 1983 had expressed concern when it seemed every shadow had a gun – for Dr Liverpool, it shows the entertainers have never missed a beat in assessing trends.

The UTT Associate professor also looked at Crime prevention, when the same Scrunter had an excellent song insisting if pupils are gonna take a lift then be sure to get the license number of the vehicle while Singing Francine’s advice for victims of domestic Abuse is simple – Run Away. 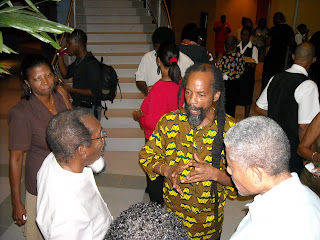 As for Justice Systems, Chalkdust is of the view most Calypsonians are firm believers of the death Penalty and Corporal Punishment;-

In 1959, Caruso called for the cat/Cat O’Nine tails to be used in “Run De Gunslinger,” in the 40’s a popular tune “Hol’ Me Tight” was looking at if women joined the Police Force and 1995 not only was there a musical call for a cat but lime and pepper the wounds! Ouch… 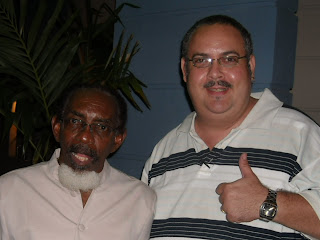 In the Question & Answer section, I got a chance to ask if Bloggers and Calypsonians serve the same purpose in showing problems and solutions few would dare touch normally? Dr Liverpool was very quick to assert in his view these entertainers were the prototype bloggers and sees both as serving an important purpose in keeping Society from becoming derailed.