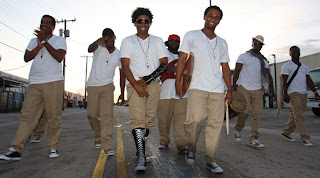 The driving force behind the new Lakol is iconic lead singer/producer Stanley Toussaint aka ??Tantan?? who has been called ?the greatest Haitian vocalist of all time.? In the 1990?s Tantan and Lakol revolutionized the Nouvel Generation movement with hits like ?Siwel? and ?Dife?; their groundbreaking single ?Ole Ole?, which was composed and produced by Tantan, won ?Song of the Year? at the Caribbean Music Awards in New York. The song later went on to become the first ever Konpa video to be broadcast on American mainstream television and radio networks including: BET, MTV International, Telemundo and New York?s WBLS Radio.

In the words of Tantan, ?This is not a reunion it?s a rebirth. This is a revolution in Konpa music; it?s the evolution of Lakol.? The group will kick off the first leg of their upcoming world tour in November at Musique en Folie followed by a National tour of Haiti. Other countries slated for their tour route in 2010 include: France, the French Caribbean, the United States and Canada. And, with their high voltage stage performances and fresh skills, style and attitude, one thing is guaranteed: Lakol promises to be a force to be reckoned with.