Well it took a year and a half of coaxing and I finally did it! Got out of Dallas and went on a journey with the Inner Visions Reggae Band. What can I say? It was a wonderful musical re-birth, as the last time I was out on the road with the reggae road warriors was in July 2007 in Rhode Island. It was to say the least a bitter sweet time. 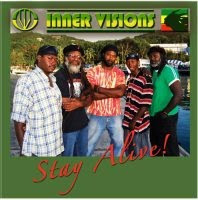 It was also the time Mikey Dread took a turn for the worse and shortly thereafter left us on this earth and I’ve been road shy ever since.

For those of you who don’t know our history let me start from the beginning.

Many years ago I was happily working on behalf of the Inner Visions Reggae band, doing PR/Media relations etc. this was long before Mikey Dread called and made the request from the Band to borrow me for a couple months. (Smile). Well the couple months turned into years and the rest is history. The results of our merging was a tight knit Roots, Reggae family; consisting of Mikey, Inner Visions, Myself, Carmelita Harris with Irie Vision World beat TV in San Francisco and the KNON 89.3 Irie FM Reggae DJ Crew, which at the time consisted of DJ’s Ima Uwagbai, Tunde Obazee, Mike D Magician, Alex C, Everton, Ras Ridi, Jah Larry, Queen Amy and Sister Kenjah and Myself along with The Scientist, Marcus “Yabba” Griffiths, Glen Washington and Tony Culture. Many more came on board in time such as; Mark Wonder and Mackie Conscious; these are all world class International performing artists.

You are probably wondering how this band from the tiny Island of St. John USVI had such a reach. I am happy to enlighten you. The Inner Visions Reggae Band has been out there in reggae land for 30 years! They are literally and without a doubt the hardest working Roots Reggae band out there. The amazing thing is. I’m not seeing them let up with a new CD due to drop in 2010 appropriately titled “STAY ALIVE“!!

Mikey once said to me “man I admire those guys, traveling from state to state for months on end, that’s hard on the body“. So whatever he could do to help, wherever he played he put in a word for them. Or he would give me the contacts to pass on to their booking agents. Once they performed in an area the fans were hooked! I’m hearing words like fantastic, electrifying, awesome and the real deal from fan and media alike when describing the band.

Why such respect for them? Well you will have to get to know them and that’s not hard at all; as Philip “Grasshopper” Pickering one of the lead singers for the group is the most personable character in the business. Grasshopper meets no stranger and it is evident, in their travels whether in the Islands, The USA or Europe the Band members in whole, leave a lasting impression.

The Band is a blending flavor of two Islands in the Caribbean. St. John U.S. Virgin Islands (The Pickering’s) and Kingston Jamaica (Ras Paul).

They are a small band with the sound of a symphony and that is no joke. They are both vocally and instrumentally strong.

I can guarantee you, if they had a gig and the lights were out. They could still do the performance as they have exceptionally strong voices and harmonizes to perfection!!!

Back to the journey:

So as we drive from Dallas, Texas to St. Louis Missouri 12 hours!!!!!. I thought man I am going to die! I am definitely not road worn. Ras Paul probably was tired of me asking; are we there yet? I could have sworn we drove through OKLAHOMA for two days. LOL.

As I close my eyes and try not to think of each long excruciating mile. I think of Inner Visions song “It ain’t easy on the road” and I think lawd!!! They were not joking, it definitely “Ain’t easy on the road“. I had forgotten. Being on the road with them heightened my awareness of their deep dedication to the music.

Well we reach St. Louis at 4:30 pm, check into the hotel its like 5:30 pm now and then at 7:00 pm we have to leave this nice cool place to go to Club Viva to sound check!!! Lawd that is just not enough time to re-coup from such a long trip. And I’m really feeling it now. (smile). Not Inner Visions though, they were hyped and ready to go. Sound check finishes around 9:30 pm and they start to perform at 10:15 pm and perform for 4 hours straight. The fans got their monies worth and more. Man their performance was mighty, they rocked the place solid!!! You would not have ever guessed that this Band traveled so far by vehicle the same day; with little rest and performed the way they did. It is just simply amazing! I have known them for many years and I am still awestruck.

It was a thrill to see the audience reaction, the appreciation and love they showed the Band. And then I saw it in my minds eye. Just why Inner Visions Reggae Band do it year after the year. Their undeniable Love for the most high and their dedication to the fans. Some fans travel much distance to see them perform. When I witness the positive vibes centered on them, I remember just why they are referred internationally as Reggae Road Warriors. It is a well earned title.

With that said I am going to leave you all with some verses from “It Ain’t Easy on the Road” Taken from their Spiritual dancer CD. You can get the gist of what the guys go through. Year after year they get on the road and give the fans what they want- PURE, ROOTS, REGGAE MUSIC in an Inner-gized fashion.