Positive things are happening at the Alexandra Hospital on Nevis. Their minister of Health in the Nevis Island Administration (NIA) Hensley Daniel made the comment during the installation of an Olympus Colposcope, the only one of its kind in St. Kitts and Nevis, to be used in the early detection of cervical cancer. The colposcope is a multi segment machine – the electrosurgical unit is a heat generator which detects abnormal tissue; the cryotherapy unit is a cold generator which destroys abnormal tissue and the colposcope is a binocular microscope used for the diagnosis of abnormal cervical lesions. 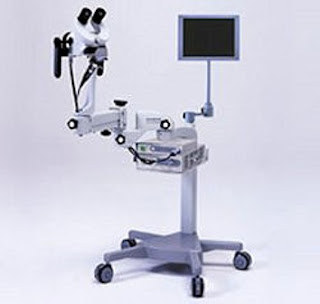 The $70,000 equipment which is expected to be in operation as of September was secured through a Caribbean Community (CARICOM)-Spain partnership. It will add to the stock of the NIA?s investment in health care services at the hospital. ?The last few years since we have been in government, we have purchased ambulances, X-ray machines and now this colposcope which would help us to move forward?We look forward to a heavy utilisation of the machine and I would like to urge the public [to ensure] that the machine is heavily utilised because we don?t want to invest in machines which become idle over time. ?I want to thank everybody for their input and I think we have the wherewithal now to ensure early detection and prevention of cervical cancer,? he said. Mr. Daniel also noted that training of two Gynaecologists who will operate the machine was facilitated by the Ministry of Health. The Health Minister thanked the CARICOM-Spain partnership and said he was pleased Nevis had received something tangible as a result of its membership in Caricom. ?It?s good to see?something tangible emerging from the CARICOM partnership because very often we are told that Caricom is dysfunctional and so this is one way of indicating that the Caricom partnership and the Caricom engagement is working,? he said. Meantime, Permanent Secretary in the Ministry of Health Mrs. Joslyn Liburd called on women and also men to get tested and to utilise the colposcope machine. ?This machine is here not just for us here on Nevis but throughout the Federation because this is the only one in the Federation so I want to encourage those on St. Kitts that this is where they would come in order to get the service? ?We want to encourage women to come and have the procedure done but first you must go to the health centres and then you would be referred to your doctor,? she said. Mrs. Liburd also thanked the Ministry of Health on St. Kitts in particular Mr. Elvis Newton. Also present was representative of medical products suppliers Andar International Mr. Darren Casey, Acting Medical Chief of Staff at the Alexandra Hospital Dr. John Essien and Gynaecologist Dr. Jessica Bardales-Essien.