The Treaty of Chaguaramas established the Caribbean Community and Market, later known as CARICOM, and was signed by Barbados, Jamaica, Guyana and Trinidad and Tobago in 1973.In 2001, a revised Treaty of Chaguaramas establishing the Caribbean Community including the CARICOM Single Market and Economy, (CSME) was signed by six member countries and now has fifteen members. The treaty was expected to be fully implemented by 2008 with harmonization of economic policy, the free movement of all CARICOM nationals and possibly a single currency.

The Revised Treaty is yet to be fully implemented and the region is witnessing increased fragmentation. Many question if CARICOM is still relevant.The Free Movement of Persons has been the most contentious issue within the Revised Treaty and has exposed xenophobia, nationalism and racism among member states.

Hatchlings – A Requiem, situates the fifteen member countries as insular national states, lying on a bed of the shredded Revised Treaty of Chaguramas.When I look at this piece, in my head, I hear David Rudder singing, ‘Rally ’round the West Indies‘ …as a requiem. 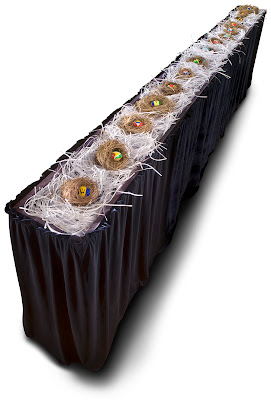