Hatuey Corrie was born on St. Cuthbert’s Mission/Pakuri Arawak Territory, region 4 Guyana; on September 17th 1993 – the first child of young parents Damon Corrie and Shirling Corrie (nee Simon).Father Damon is a well known International Indigenous Rights activist, autodidact journalist and author of 6 books, a member of the Indigenous Caucus of the Organization of American States (OAS) since 2000, and has been officially registered at the United Nations Permanent Forum on Indigenous Issues since 2008 (UNPFII).Father Damon was born in Barbados of maternal Guyanese Lokono-Arawak ancestry, and mother Shirling is a local Arawak girl who herself was born on the 240 square mile semi-autonomous Amerindian reservation 60 miles up the Mahaica river.Hatuey completed his primary education at the private St. Angela’s Catholic School, and on September 2nd 2009 entered fifth form at the Christ Church Foundation School – both in Barbados. 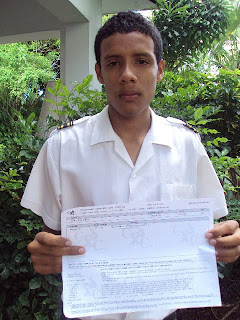 15 year-old Hatuey was considered proficient enough in Mathematics while in fourth form by his teacher at CCFS Mr. Gibbs – to sit the CXC mathematics exam one year ahead of his fellow classmates – who customarily sit this exam in 5th form (this current school year).

Hatuey also credits his achievement to his private lessons maths teacher Mr. Dominic of the St. Ursula’s private Catholic Secondary School, and his grandfather Geddes Corrie – who himself as a lad of 15 in Trinidad passed his 6 University of Cambridge Senior School Certificate exams (including Mathematics) – all with B grades.

Grandpa Corrie went on to become a Telecommunications Engineer with the UK based Cable & Wireless Limited; retiring from that position in Barbados in 1985 after 39 years of service.

Coincidentally, father Damon also received grade II’s in his CXC examination results, but after spending 3 years at the Christ Church Foundation School, 1 year at the Presentation College Boys private Catholic Secondary School, 1 year at the private Anglican Codrington High School, and 1 term at the Barbados O’Level Institute – Damon decided he could stay at home and educate himself with his CXC books, he then paid fees to sit his CXC examinations as a ‘private candidate‘ and only showed up to join other students in school to sit his exams on the days in question.

Hatuey has 3 other siblings, brother Tecumseh Shawandase (13 years) is at Combermere Secondary School in Barbados, sister Sabantho Aderi (10 years) is at St. Angela’s, and sister Laliwa Hadali (2 years) is on the St. Cuthbert’s Mision/Pakuri Arawak Territory in Guyana with their mother and the rest of the tribe.

Of the 2009 CXC results in Mathematics for the students on St. Cuthberts – Hatuey has achieved the highest score for any child born there.

Hatuey is a fifth generation descendant of Amorotahe Haubariria – who was the last Hereditary Lokono-Arawak Chief of the Eagle Clan (Bariria Korobahado) in Guyana in the late 1800’s; and after completing his education he is determined to return to St. Cuthbert’s Mission/Pakuri Arawak Territory and dedicate his life to the development of his Lokono-Arawak people and the preservation and promotion of Lokono-Arawak culture & identity.