Winston Quelch, Vice President of the Grand Turk Cricket Association and Sports Development Officer of the Turks and Caicos Islands’ Sports Commission, says that the Digicel Cricket Clinics will give a critical fillip to cricket in Grand Turk.

?It has lifted us to a whole new level ? just to have someone of the calibre of (Head Coach) Keith Arthurton being brought in by Digicel and imparting knowledge not only to the kids but also to myself and the other coaches is significant,? Quelch said during the Digicel Cricket Clinic on Friday. 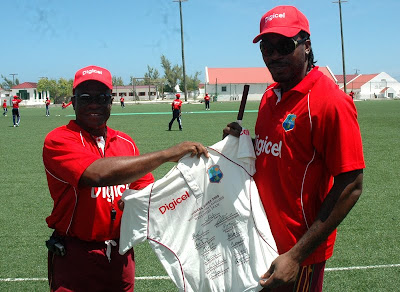 The final round of the Digicel Cricket Clinics for 2009 is being hosted in the Turks and Caicos Islands and Head Coach Arthurton and West Indies player Chris Gayle visited Grand Turk to work with over 40 kids over the weekend.

While Quelch expressed delight and gratitude for the Digicel Cricket Clinics being brought to Grand Turk, he also said that the larger benefit is yet to come.

?This Clinic has really given us a boost and you will see the results in the next few months,? Quelch reasoned.

Quelch, who conducts a daily cricket coaching programme on the island, said that the presence of Gayle ? the internationally acclaimed batsman ? excited the eager kids who he works with on a daily basis.

?Chris is a premier batsman ? so for the kids to see him in person and interact with him and learn from him is nothing less than tremendous. They will be even more eager to come out and play cricket,? Quelch said.

He said also that the local officials must now build on the momentum.

?This is just the beginning. If we can build on this and continue it, we are going to see some fantastic cricketers coming through from Turks and Caicos,? Quelch said.

He explained that the youth programme which he manages ? Grand Turk Youth Development Squad ? is a partnership effort between the Turks and Caicos Sports Commission and the Grand Turk Cricket Association and that both entities were exceptionally pleased to have had the Digicel Cricket Clinics 2009 culminate in Turks and Caicos.