Dramaworks (Barbados) Ltd., the new theatrical company founded in 2008 by the well-known actor and director Patrick Foster, is reaching new heights with its upcoming tour of Caribbean islands. Its production of the acclaimed Derek Walcott play “Pantomime” was such a critical success during its Barbados run in March 2009 that the idea of taking it on a regional tour was presented to and instantly accepted by the University of the West Indies (Cave Hill) Open Campus. Originally produced in collaboration with the University?s Cave Hill Theatre workshop, the regional tour was negotiated by Principal of the Open Campus Professor Hazel Simmonds-MacDonald and warmly accepted by many islands. 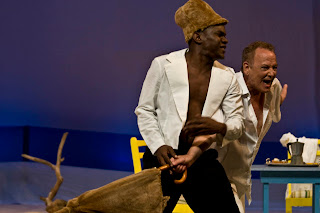 The tour begins on September 25 and 26 at the University of the West Indies Open Campus in Antigua, goes to the Open Campus in Anguilla in November 2009, then to Trinidad in time for the Derek Walcott Symposium at the University of St. Augustine, January 15-17th, 2010. Visits to Grenada and St. Vincent are still in the planning stages. The tour then ends in St. Lucia in time for the annual Derek Walcott Celebrations in the Nobel Laureate?s home island, at the end of January 2010; appropriately, as Derek Walcott was quoted as saying after attending the Gala opening in Barbados on March 9, that it was one of the finest productions of his play that he seen. 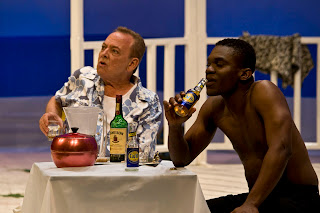 Starring charismatic actor Patrick Foster as the redoubtable English expatriate Harry Trewe and the mesmerizing young actor Simon Alleyne as his Man Friday, the play is set in 1976, in and around a gazebo on the edge of a cliff at the crumbling Castaways Guest House in Tobago. Directed by Rob Leyshon of the Cave Hill Theatre workshop, the play received rave reviews during its Barbados run. As the Director Rob Leyshon has said ?Pantomime is the funniest, most abrasive and yet at the same time the most tender of Walcott?s theatrical works.? 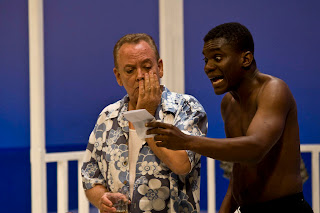 Artistic Director Patrick Foster tells us ?I chose Pantomime for our first production not only for its great entertainment value, but also for its multi-layered text and its examination of acting on multiple levels. The casting of older and younger generations is a demonstration of sharing and exchanging skills, learning from each other, while giving both perspectives to a Caribbean classic.“