Resident Judge in the High Court in Nevis Her Ladyship Ianthea Leigertwood-Octave ruled late Friday that the Commission of Inquiry on Nevis would remain on hold, pending the conclusion of matters that were before the court against the Inquiry, Commissioner Thomas Sharpe QC and the Nevis Island Administration.

Moments before the two day judicial review ended in about 5:30pm, Judge Leigertwood-Octave indicated that she was aware that the hearing was a matter of urgency, however, she said she would endeavour to arrive at a decision at the earliest possible time.

The hearing which commenced on Thursday looked into claims by former Premier of Nevis Vance Amory which challenged the legality of the COI, the appointment of Commissioner Sharpe and charged that the Commissioner and most of his support staff had reason to show him biasness.

On the second and final day of the court proceedings, Lead Counsel for the respondents – former Barbados MP, Sir Richard “Johnny” Cheltenham, in his submission during closing statements, referred to the matter against the Inquiry as weak and was of the view that it should fail in every respect and as such, the Inquiry should be permitted to proceed. 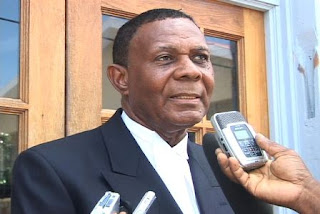 Sir Richard argued no case had been made out of bias and the application before the Court ought to be refused with Costs citing that the matters raised by Counsel for the Claimant were no more than warmed over soup.

He also said that there was nothing presented in evidence that had established any bias on the part of the Commissioner.

He dismissed as totally irrelevant, references made by Counsel for the Claimant to Mr. Sharpe?s previous experience as a Commissioner and with public commentator Mr. James Gaskell.

Sir Richard later pointed to a matter in St. Kitts some years ago in the case of Simmonds and others versus Williams and others, he explained that, that matter provided clear guidance from the Court of Appeal in the Jurisdiction.

The Court was also addressed by Dr. Henry Stucumber Brown who represented the office of the Attorney General.

In a 45 minute presentation, he said that the NIA had a constitutional capacity to set up Commissions of Inquiries and tribunals.

Earlier in the day the Court had heard legal arguments on the question of whether Sargeant Steven Hector, a former investigation officer with the COI should be allowed to give evidence before the court.

He was also cross examined by Sir Richard. The COI was established by the NIA to investigate and report on the circumstances which surrounded several transactions of Government over the period 1996-2006 had commenced in July 2009.