In cycling when they covered the back wheel to reduce air drag it was an issue, even now – as far as I know – they are still debating when it should be used… Finals, training or heats and the like. Not just overseas but even within the Caribbean.

The Fosbury flop when originated took much time before accepted then adopted as a standard. Michael Phelps may have desisted from using bongs but now they even look at what “threads” (or lack thereof) are used for swim meets;-

“We’ve already started to think about what kinds of things we’ll be doing for 2012,” said Rick Sharp, an exercise physiologist at Iowa State University who has played a key role in the swimsuit wars. Then he added with a chuckle, “I can’t tell you what those are.” Sharp was part of an outside team of experts – also including NASA engineer Stephen Wilkinson – 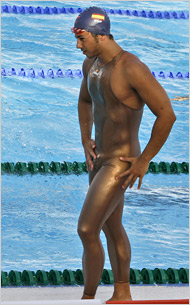 and that led competitors to ask angrily whether using the suit amounted to “technological doping.”

Swimsuit tech has been making headlines for almost 10 years, starting with the “Fastskin” suits introduced by Speedo for the 2000 Olympics. The idea was that the suits’ V-shaped ridges, modeled after shark scales, would cut down on drag and let the swimmer slide faster through the water.

If this ban happens, there is still a window of opportunity before the hammer falls, but even Medallists welcome the proposed change;-

The ban does not start until 2010, but the polyurethane-based swimsuit era that the swimwear giant Speedo introduced in the lead-up to last year?s Beijing Olympics will effectively be ushered out, presumably with a bang, at the swimming world championships that start here Sunday.

In the 17 months since the LZR Racer hit the market and spawned a host of imitators, more than 130 world records have fallen, including seven (in eight events) by Michael Phelps during the Beijing Olympics.

Phelps, a 14-time Olympic gold medalist, applauded FINA?s proposal that racing suits be made of permeable materials and that there be limits to how much of a swimmer?s body could be covered. The motion must be approved by the FINA Bureau when it convenes Tuesday.

In the Olympic individual events, only four world records remain from the pre-2008, pre-polyurethane era: the men?s 400- and 1,500-meter freestyles, and the women?s 100 breaststroke and 100 butterfly. As setting world records became almost commonplace, the swimsuit controversy spread beyond issues of performance into the territory of morality.

I am about to propose a number of categories which apply not only to suits, wheels or styles of execution but even use of substances…

Then have a next category for those who wish to use their own muscle or skill, this can be referred to as the “Natural” category and have it wide open for professional or amateur – you then separate the calves from the bulls or heifers.

The last category would be “Chemically Assisted” where steroid users, blood-packers and the like can destroy themselves getting a new World Record.

I can hear the gasps for the last part, but for real – if you wanna destroy yourself getting an ultimate result then do so at your own risk, stop wasting money trying to find dopers and open it up and then they confess naturally and then there’s no surprise when they perform unnaturally like Ben Johnson in ’88.

I am sure some folk will wonder if this means I feel drugs should be decriminalised and considering everybody uses tobacco and alcohol already, then why the hell not? Cut the market out from under the pushers and just have warnings not to be taken with control of heavy machinery like certain medicines.