I got an e-mail which really jumped me and it speaks more and more that discrimination even in such a so-called enlightened era really screams for attention, it’s only when we shout in return by exposing it like here, that it starts to lose its voice!

I have done a Google search and found the story is true, more importantly, they have pulled the offending item off the shelves – I think this note started all the action;-

In this day and age, racism and ugly stereotypes continue to rear its ugly head. The recent Gates case, the Boston police officer calling Gates a “banana eating jungle monkey“, and others are strong examples.

Racism and negative stereotypical portrayals of African Americans comes in many forms. 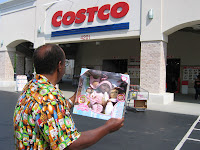 My cousin, John Taylor and his wife, Donna who live in North Carolina, recently went to COSTCO in Greensboro and could not believe what they saw perched on the shelf for sale. As the photos show, the baby doll is being hugged by a monkey and the doll has a cap on its head that says “lil’ monkey“! They have lodged complaints with the COSTCO Corporate HQ’s and while their efforts succeeded in getting the doll pulled from the Greensboro store, the doll is still on sale in Winston, Salem and likely in other locations.

These dolls are in insult to us all and need to be pulled from all COSTCO stores or wherever they are being sold. COSTCO also owes their customers an apology. I hope you are as outraged as I am and if so, call COSTCO HQs and demand that this product be removed from their shelves without delay. 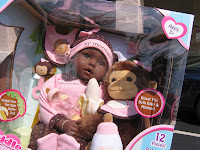 Please feel free to spread the word to your networks to contact COSTCO and demand they stop selling this doll.

This is not a hoax. I’ve verified its authenticity. I will be doing my part in getting this to the National Media.