It was the first time this News-Blog has seen a book launch inclusive of active critique. We refer to the debut of Esther Phillips’ “The Stone Gatherer,” an inaugural session largely ignored by mainstream media… 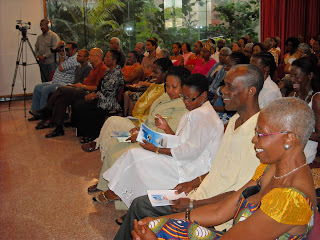 Robert Edison Sandiford mentioned how many first drafts of the collection were tested in the group sessions with Writers’ Ink, I suspect he stated this since he was surprised the Bajan author-collective was not included in the Acknowledgments, in the Peepal Tree publication, this News-Blog is fully aware how ingratitude can spark a long stream of carefully researched invective… 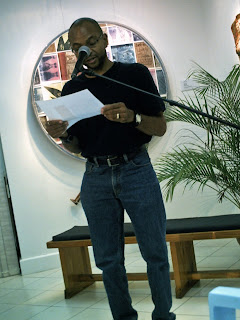 Robert’s choices of reading included personal reasons – Pot Maker he dedicated to the memory of Sonja Skarstedt, taken away at 48 by cancer, but Easy Boy was chosen by Robert as he suspects this is Esther’s vision of Male Creativity. 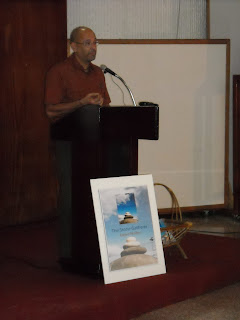 Mark McWatt’s choices for the launch were to present “Hag” and “Unseen,” both pieces reminded him of his hometown Georgetown – he added that not knowing why a poem was created can add to one’s appreciation of what’s written. 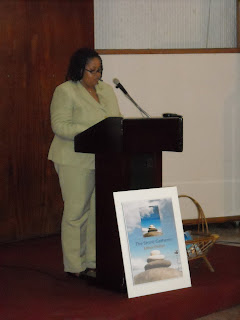 Dana Gilkes delivered Lacuna and The Sceptic, while Margaret Gill put her all into the presentation and gave the most dramatic readings with Ms Phillips’ Ceremony of Innocence as well as Contraries, in explaining why she ascribed personalities to different sections, Margaret revealed she envisioned Esther’s personality as a High Catholic with censer and all despite the fact the author may be an Anglican derived from a Pentecostal background. 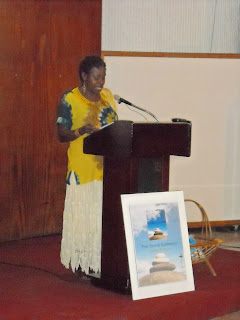 The most detailed analysis of the collection – even with Latin and Greek references – was Dr Carolyn Cooper from Jamaica, who also cited Ms Phillips’ ambiguity in accepting or revelling in her sexuality. One minute in the collection imagining herself as filled with such power after a good romp as being capable of shorting electrical instruments yet when publicly confronted on the matter Esther wishes to downplay such prurience. 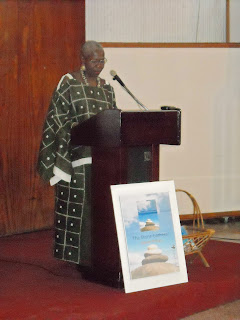 Dr Cooper stated how the title of Esther’s collection stems from not the chapter and verse she listed but even further back in Chapter 3. The Caribbean professor says stone becomes word becomes flesh in the poetry. In the end, she pulled back her stark analysis to instead declare that Ms Phillips’ collection was a “

sparkling string of gemstones,” which I think was added as a sop for her rather somewhat brutal yet glowing breakdown of the slim book. 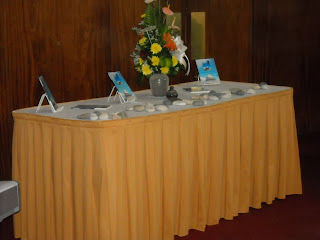 As each invited personality made their presentation, each reader was to select a stone from designated piles on the table apparently based on either Biblical or Chaldean numerology – most of the time each person forgot and Esther had to rope them back to choose a rock, which was then selected with what appeared to be a “

What on Earth am I doing?” look on their face… 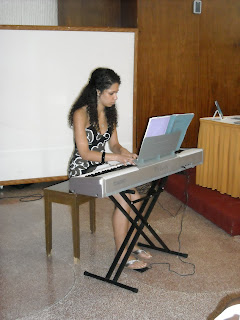 Jessica Armitage, Esther’s niece was chosen to play some chamber music before the event started and also a brief interlude during the launch, at that point she delivered Debussy’s “

Claire De Lune,” while I enjoy classical music from time to time I was a bit taken aback – if this Bajan poetry and usually set on Caribbean matters, why not some gentle regional ballads played via pan?

Welcome The Morning Sun,” Andre Woodvine & Stedson Wiltshire’s “Hold You In a Song” or Charmain Heyliger’s “Love Is The Key” from Barbados, more appropriately is Eddy Grant’s “Romancing The Stone” even if a bit pacy… 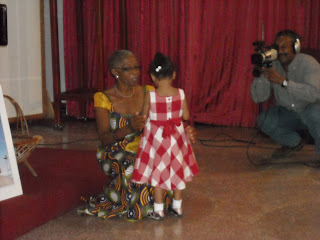 The classical etude on a Casio mimicking a harpsichord or clavier left me a bit cold, despite the fact Jessica is obviously an accomplished player – she also seemed a bit self conscious in playing the music at that point. 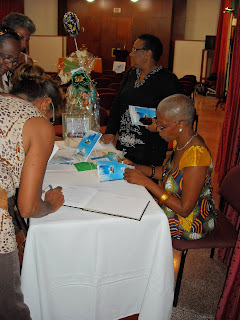 At the end of the ceremony there was a touching point when Esther gave one of her books to her infant grandchild Zoe. The book’s sales were admirably handled by Beverley Smith-Hinkson of the Book Source, who is one of the retailers for this piece. Book Source is not limited to Barbados but the world since it is also a website catering for myriad tastes, give it a visit sometime?