After a successful launch at Moment’s Night Club in Elmont, NY last week, the Heineken Irie Jamboree Club Tour picks up steam, adding Dancehall’s peppery vixen Spice to the second leg of the tour, which hits St. Alban’s hot-spot Queen of the Sea Restaurant and Lounge on Wednesday, August 19th.

After attracting hundreds of patrons to Moments last Thursday, Irie Jamboree Executives are looking forward to another successful jamboree session, believing that Spice,

whose saucy tune “Ramping Shop” debuted at #96 on the Billboard Top 100, is currently #16 on leading NYC urban radio station Hot 97, and #7 on NYC’s signature Caribbean radio station Irie Jam 93.5 FM, will be a welcome addition to the tour.“Spice is definitely a rising dancehall star,” states Irie Jamboree executive Bobby Clarke. “We are excited to have her as one of the Dancehall acts on Irie Jamboree this year, and we know our patrons will be very excited to see her at Queen of the Sea on Wednesday for the Heineken Irie Jamboree Club Tour.”Sponsored by international brewing giant Heineken, the Jamboree club tour will hit six of New York’s favorite Caribbean venues in Long Island, Queen, the Bronx, and Brooklyn throughout the month of August. 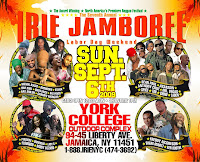 The Heineken Irie Jamboree Club Tour and Irie Jamboree 2009 had their official launch at Club TOUCH in New York City earlier this month.