(Attn – PG-13, Language) Not so long ago, this News-Blog highlighted how there seems to be a new yet not so recently made flick due from Bongo Lights of “Tek Dem Out” and “Vexx” fame…

Well, he appears to be living up to the title of his last feature, when we e-mailed him about “Life In De Ghetto” he was quite acid and even gave us permission to quote him, he feels Government should be doing more to assist Bajans become film-makers if they desire;- 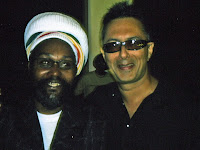 “Well, I want to do it in September, [but I] was getting problems with my G5 Mac editing, [now] I back on, [it’s] just that [in] Barbados u don’t get help from Government or people here and as soon as I finish premiering this movie I think [I’m] leaving Barbados for good, the NCF gives people at Crop Over thousands of dollars to sing s*** – [yet a] movie, which is a lot of work, they don’t check really for us, I calling it quits just now, but I trying to showcase in September [later on].”

Bongo’s view is that his fan-base is strong enough for him to test his wings elsewhere, if what he says is true, then he may indeed stand a chance;-

“I got people in Trinidad, Bahamas, all through the Caribbean that want to see my movie – some people want to even come for the premiere, I spent my money in doing everything, when u look [at] this movie, it could hit big – and even bigger [than] TEK DEM OUT, [which] still got people chatting about it and I know that this bigger than that, I put emancipation walk on youtube and people love it, Crop Over? They love it and I can do a lot more to promote Barbados but the so-called Government can’t see the future for the visual arts, if I ever get the chance, [then] Jamaica in trouble when it comes to making movies!“

Meanwhile, apart from Life in De Ghetto, Bongo also has a Rastafarian fantasy movie with Andrew “Hit For Six” Pilgrim, and I must say Bongo’s editing techniques have improved, he’s also trying to add in sound stingers to add punctuation to dialogue;-

Honestly, Bongo’s comments remind of concerns expressed by Ras Akyem in November when he was also looking at visual arts but from a perspective of paintings and a proper National Gallery to contain such work… Perhaps paintings and film must be hand in hand – the Christopher Codrington Cultural Centre for Visual Arts?