DIGICEL CARIBBEAN CUP NEW YORK OFF TO A GOOD START 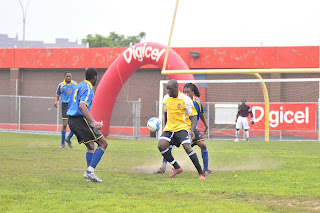 It took a questionable second half penalty kick by captain, Ryan Reid, to pull a lacklustre Jamaican unit level, midway through the second half, after SVG?s Seinard Bowens cracked a hard, low right footed grounder past a diving goalie, Maurice Evans, who got to the ball but could not keep it out in the 33rd minute.

Coach, Arthur ?Jetty? Mikes, said that his ?Reggae Boyz? took a while to settle down against a more aggressive SVG unit, who were fighting to stave off elimination. The result keeps Jamaica in second place in the East Zone grouping, two points behind leaders Barbados who did not play on Sunday. With the draw, the former champions SVG move into a third place tie with Grenada on seven points.
In the first match of the afternoon, Guyana kept its slim play-off hopes alive with a 4-1 thrashing of Dominica. Guyana got its goals from halftime substitute, Roger Cambridge (Junior Cambridge), and a hat trick from Kevin Beatton. Engel Smith scored for Dominica whose cause was not helped when regular goalkeeper, Arminex Carbon, had to leave the game due to an injury. 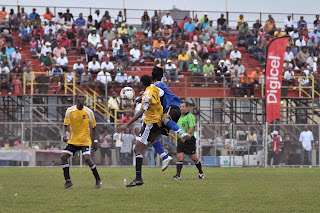 Digicel was also on hand during the day to make sure that football fans had a thoroughly enjoyable day with a host of competitions and giveaways such as the half time ?Kick for Cards?, where fans had the chance to score from the half way line to win Digicel calling cards.
Kurtis Chance, Director of Operations for the Caribbean Cup Inc., said of the activities: ?It was great to see all the Digicel activities taking place during the matches on Sunday. The ?Digicel Kick for Cards? was a great success with two lucky Dominican customers walking away with Digicel calling cards worth US$10 each to help them stay in touch with friends and family back home.?
Customers were also invited to visit the Digicel booth where they could top up their friends and family back home in the Caribbean and learn about the difference products and services that Digicel has to offer the Diaspora community such as; online top up ? where customers can log on to any Digicel website and top up or send minutes to people back home; retail top up ? where customers can go into any one of over 100,000 retail stores in the UK, Canada, the Caribbean and the USA and purchase Digicel top up or send Digicel minutes to friends and relatives in their home country; and Digicel calling cards ? where customers calling friends and family in Haiti and Jamaica can call home at competitive rates using minutes stored on the calling card.
The Digicel Caribbean Cup New York continues on Sunday, August 16th, with another three matches including the play-offs which start at 3:00 pm.