In the Peanuts comic strip (running to 2025, fifteen years left, enjoy the reruns while they last, that was Schulz’ deal before he passed away in 2000), Linus Van Pelt wants to actually see the Great Pumpkin… However, this week I finally managed to get on board the Iron Duke! Regular readers know this has almost been a Mythic Quest for this News-Blog… So, imagine how I felt when just as they performed a ritual of lowering the flag with St George’s Cross (the official flag of Great Britain), when … ?? Thing is that’s the second time something like that happened to me, I hereby vow for any important event? Place Fresh Cells in Camera! 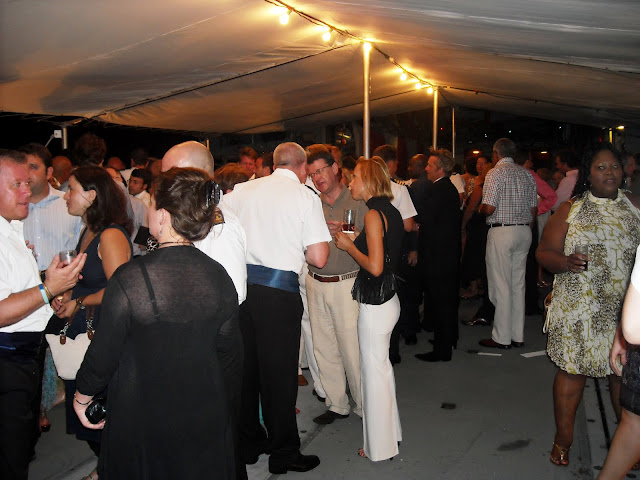 Be that as it may, the soiree on board was a grand affair – Sue Springer from the BHTA, Chay Davis of the Tourism Authority, Lars Soderstrom of CBC, Martin Ince from Foster & Ince, Inspector Jeffrey Howell of the RBPF, Charge D’Affaires Brent Hart with his encantada esposa Saskia of the US Embassy were some of the Barbadian Who’s Who on board that night. 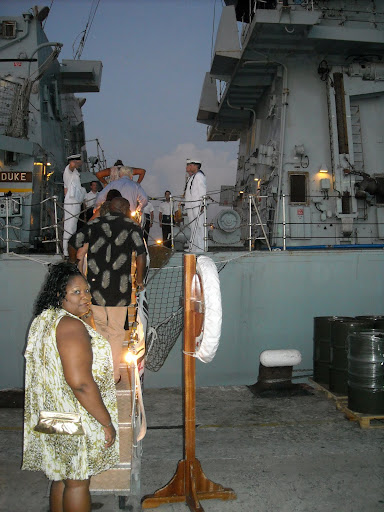 Mini-Bangers, Chicken or Mushroom Puffs, Salmon on pumpernickel were some of the treats the crew offered. I chose rather than wine, the Tortolan rum that is the official drink of the Royal Navy! That stuff would straighten Jack Sparrow‘s dreadlocks yet the officers drank it like sparkling lemonade?

Well, every guest was assigned an officer – I really wonder, maybe for security purposes, if they had badges with their real names? The likes of Taff Croft, Clive McGing and SWAMPY MARSH, yes – I said Swampy Marsh, these were some of the names I spotted. The officer assigned to mi querida mujer and self had the regular name of Dave, he was our guide along with his fiancee who flew out to Barbados to meet him, and this was a secret Godsend since when the festivities were officially over, we got to go belowdecks for an after-party and have sport in the Officers’ Recreation Room! Even further we were given a brief tour of some of the innards of HMS Iron Duke… It pretty much made up for the dud battery episode (the crew actually supplied me new AA’s when they learned of my distress)! The total complement is 180 members, they are at a massive premium for space and therefore 40 guys to five showers is not unusual nor having a cycle machine ensconced betwixt some engines! Like the USS Hawes, they emphasise fire safety at all times – what is different from the American warship is the Brits also stress, via clever little posters each deck, is to maintain secrecy (Old adage was “Loose Lips Sink Ships” but now they have stuff like “Share a Joke, Share a Drink but not a Secret“) or be quiet at all times (Noise can attarct enemy submarines); for obvious purposes of foiling narco-traffickers, terrorists and the like. So it was a grand old trip on the Duke, hope I can make a daylight run in future and actually see the Captain’s deck! Many thanks to the British High Commission for their kind invitation!