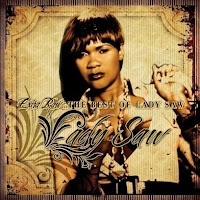 This 18-track album and DVD encapsulates her most brilliant work over her 13 year career with VP with crucial hits from her catalogue and a bonus DVD featuring uncut and an explicitly electrifying 1997 New York City stage performance as well as her biggest music videos.

Lady Saw is a foundation artist for VP Records and dancehall reggae, with seven albums in her career, high profile collaborations with Missy Elliot and Pharell Williams, and headlining slots at several international music festivals.

Dubbed The First Lady of Dancehall, she has convincingly juxtaposed memorable, sometimes shocking lyrics with her deep devotion to God and family and she dares you to think there?s a contradiction in that! She has addressed controversial topics such as unfaithful lovers (?Give Me The Reason?), female degradation (?Sycamore Tree?), infertility (?No Less Than A Woman?) and safe sex in the wake of the emergence of AIDS. In 2003, Lady Saw won a Grammy award for ?Best Performance by a Duo or Group with a Vocal? for her collaboration with No Doubt, “Underneath It All“.