UNDER THE FLAMBOYA TREE: IT DON’T MATTER IF YOU’RE BLAQ OR WHITE – RACE & RACISM HANDLED BY CROP OVER READ-IN 2009

UPDATE: 15-07-2009/CLARIFICATION;
I got a call on my cell about this article, the caller made some accusations that I do not agree with. I list them not in the order they were presented… Further in the item I suggest for two poets to adopt African names, it was a suggestion and not ‘a personal attack‘ – still trying to figure out how that could be construed as a ‘personal attack‘? The piece “Mirror Image” indeed tapped several themes but I examined the ones which caught my attention – I am not doing a college thesis where I look at each and every point. As for the final paragraph in this article, I am only making a suggestion towards interaction based on how it appeared that night, ok? Let’s get this straight – as Mr Nielands pointed out further on herein, words are powerful things and if I as an older viewer had certain thoughts after the show then what might younger listeners think, feel and possibly act based on the poetry told?

Many Bajans tend to feel if you have nothing nice to say, say it behind a person’s back. This News-Blog has put a Bull’s Eye on itself more than one occasion for NOT doing that… I went to a cultural extravaganza over the weekend and there were bits I did not agree with and I state why. Before I do, let’s examine what was positive, ok? 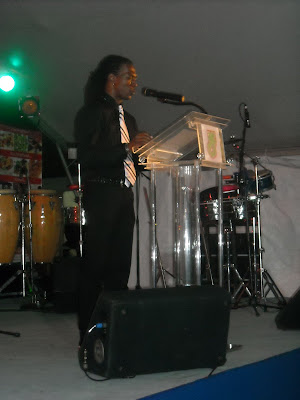 Like Mark Jason Welch interpreting Bruce St John’s poem on the sea, where you feel he’s comparing two women. Until you hear the very end of it, masterful! Well delivered!

Another piece of eloquence came from the Main Sponsor’s representative, David Nielands: the Managing Director of Super Centre, who was very prophetic in his scrutiny of words themselves as arbiters of change. He started with a humourous rambling anecdote of himself and his wife at a wedding at the Savannah hotel in Hastings, then he ended up by almost giving a soliloquy on the power of words. Mr Nielands said how words could heal or start wars, little did he know… 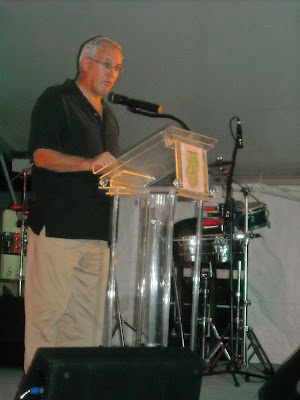 VENDORS & INTRO’S
I felt it was a necessary touch to allow small business persons to flash their wares at this venue, since it not only showed people there are some who look at combatting the global downturn as a job best done by hauling yourself up by one’s own flip-flop straps, It afforded a unique method of passing time as other patrons gathered. In this case, it was FAST, the place was packed by 8:00 pm and they were fairly punctual. 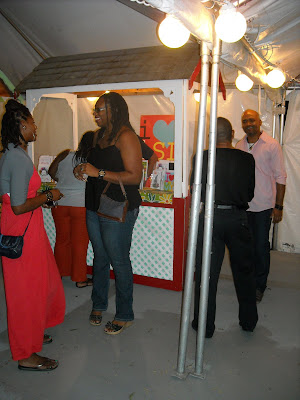 The emcee that night was Na’ilah I-moja (Many moons ago she was Charmaine Gill, I have my reasons for stating that) and I wondered why she read the entire DRAMATIS PERSONAE of “Under The Flamboya Tree“? It was not until the show went underway that I realised – they let the performers appear one after the other on-stage without the usual patter, they had to, it was a lengthy production. Probably could have shaved even more time if the performers were listed on a pamphlet and let them fly, but that’s just me… 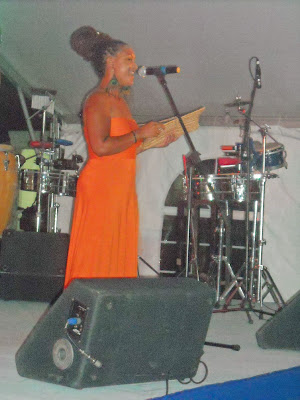 You could tell when poets hit nerves of the audience since they would go quiet very abruptly. This happened with Indra Rudder (Author of “The Human Bean“) when her poem mostly looked at being a “hybrid chameleon,” where she made no apology for being neither black nor white nor even daring to stop and choose a side! Excellent content which received a polite smattering of barely accepted applause.

Kenneth “Jack” Lewis almost got a standing ovation on the other hand for his near-cussing and clever use of Bajan slang and taking a very wry & askew look at Crop Over. Yet the part where he boldly stated no one person in Barbados is fully white nor black only got applause from me and I was stared at for doing so. He spoke the truth and it hurt. Tough! 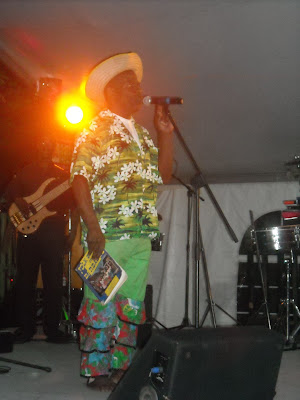 His other observations are how can we look at sugar harvesting when we barely have enough sugar to make for ourselves far less to export it. The little sugar there is goes towards rum which creates diabetics, alcoholics or both. He also attacked beach erosion, dumping in gullies and interspersed with a chorus from an old Bajan folk tune – precision comedic timing and a wild outfit totally appropriate for his metered tale. 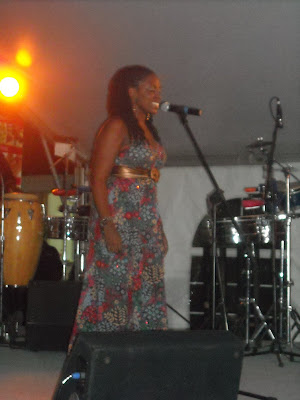 Dorhonda Smith sang and talked about being a seamstress to make money to get a meal for her son who kept her up even later in the night asking about the contradictions of Barbadian life. Winston Farrell made two rythm-poetry appearances (His 1st poem was a tribute to the late Ricky Parris) and Aja wrapped up the night with a rousing band-performance.

BENY BLAQ & LINDA DEANE – FUN IN DIFFERENT WAYS
I can understand why Linda Deane did well in the “Celebrity Calypso Tent” five years ago, pity she has not re-entered… She had so much fun that night singing and chanting about “Rain” with two energetic female dancers gyrating like random splashings of sky-juice. 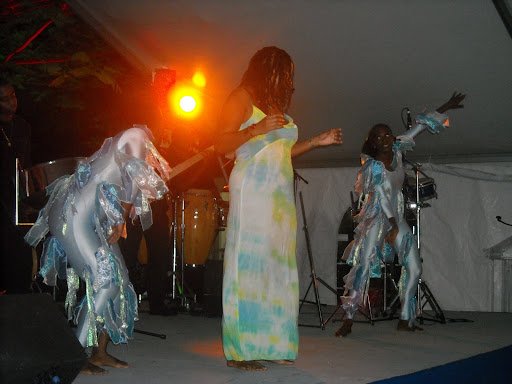 Linda looked at the different aspects of that form of weather – be it the typical reason a Caribbean person calls in sick or if couples feel randy when there’s a pitter-patter on the roof. She did not take herself seriously like one time when I recall her delivering a reading of her “Cutting Road Blues,” yet I could sort of feel a vague soup?on of self-consciousness in her appearance – pretend the audience is naked, Linda, and let it rip!

Beny Blaq was hilarious in his between poem chat, reliving his childhood in the USA with 2 Bajan parents, doing his own therapy on father-son relations and his Rustem-Sorab dynamics with his own father who tries to make amends with Brooks Brother shirts.

“Selfish Lover” is not romantic in the least, it refers to his clashes with his dad… “Imus Speak” quite correctly shows if a Don Imus is reprimanded for his comment on Rutgers U. B-ball gals, then why are not rappers on BET dealt with the same way? 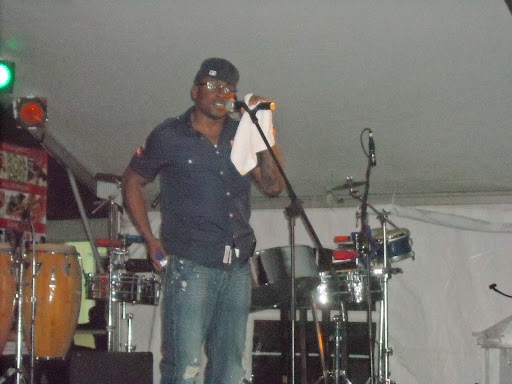 The man is good, he actually developed haikus (Usually Japanese poems which have 5 syllables first line, 7 on the second and five again for the last) on his way to Tyrol Cot! Whether it was on “First Love” or about the uses of his grandmother’s cou-cou stick, he had the crowd totally – especially moving was his “Homeless” haiku…

There is no place
like Home, too bad,
it’s broken

Beny spoke of racism and racial people in the USA, but he did not specify perpetrators, just reviewed the circumstances or the lack of insight these so-called adults tried to pass on…

BEING WHITE – AUTOMATICALLY EVIL, INSTANT CRIME OR FOREVER ASHAMED?
I am now changing gears and looking at what could have been better in the show – if you are thin-skinned or have a hair-trigger temper? My advice is to skip this part of the review.

I have questions based on some of the performances that night… If a body looks white or is Caucasian are they a villain by force of nature? Without judge, jury or bailiff – all pale-skinned have been decreed Persona Non Grata? Because of what ancestors are in your tree, one must forever be shamed? Where does healing begin? When does enlightenment ensue from either or both sides? What happens if you have both sides residing in yourself – do you commit seppuku?

What about Malcolm X’ statement that interracial relationships are a personal choice or how his view of white people as villain changed once he went to Mecca and saw blond, blue-eyed men hailing for the same Allah as he? These same men inviting him for meals and eating from the same bowl as he?

Yvonne Weekes mentioned Malcolm X as one of her father’s heroes yet she seemed to have lost the lesson. She was writhing – almost in painful convulsions, as opposed to Linda Deane’s sinuous undulations, Yvonne was strident as opposed to making a point like how Beny Blaq did. 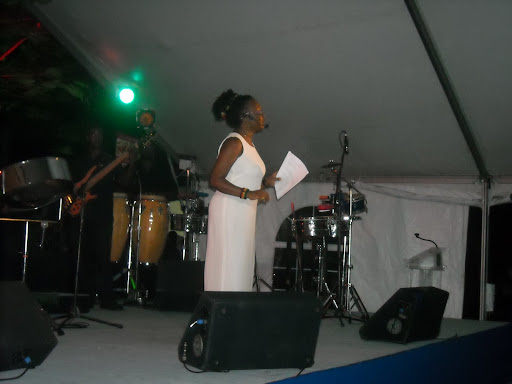 In sum, I was not impressed, I know there is a refrain or Call & Response in some forms of poetry… But she fell from her mother’s womb so many times I began to fear for her being severely concussed. She claims she tore the blonde hair off her dolly hoping locks would grow back, she was attacked in schoolyards for her skin. Then she eventually steps into the audience to ask them who their ancestors are, and at one point she actually holds the mike in front of David Nielands! He cheekily answers his ancestors were likely Vikings who sailed the fjords of Norway, good for him! Did she expect him to say ‘Woe is me, I’m one o’them evil pale folk‘??

Adrian Green was not so far off the mark either… He kept asking the audience what is their mirror image? He was upholding black over white – unlike his more humble “Rebel Diva” poem two years ago which simply praises black women who choose to remain natural in their appearance. 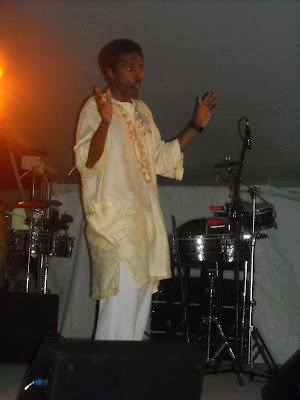 He chose Beyonce as a black woman who seems white to the degree he’s expecting seven dwarfs trailing behind her, honestly, if he dissed Michael Jackson – however accurate he may be on the late icon’s appearance over the decades – I would have booed him off the stage!

From a rant on on black women Europeanising their looks, it became a diatribe on anything Caucasian including the historical Nelson…

Wayne Wells (who was present that night)…

Who are they? Wayne became Onkphra, while Charmaine evolved to Na’ilah I-moja… As for Mr Richards, he became Adisa Andwele – now, Aja! Who concluded the night at Tyrol Cot.

Why do I bring them up? If whites are so bad, and all Africa is up for praise, then why do Adrian and Yvonne keep their ‘plantation‘ names? It seems they give one way and take another… Even Na’ilah, Aja and Onkphra while celebrating their African ancestry can show enough open-mindedness to interact with everybody, maybe they need to offer some advice for Ms Weekes and Mr Green? In fact, why not take a leaf from the late Gloved One gone too soon? “It don’t matter if you’re {Blaq} or White!“