The first live studio show for Digicel Rising Stars was held Sunday June 28, 2009. It was an exhilarating hour of performances that got the judges talking and the audiences cheering. There were eight performances for this week and the next seven contestants will take to the stage next Sunday to prove they are worthy for a spot in the top ten of the Digicel Rising Stars series.
Performances

Performance wise, the show was a roller coaster with a range of good, bad and, according to Anthony Miller, ?horrible performances?. Of the eight contestants, the outstanding performances for the night came from Brown Sugar, who tackled R&B newcomer Jazmine Sullivan?s Lions, Tigers & Bears and her fantastic vocals saw her stealing the show. Equally memorable was the performance of Angelle and of the odd-pairing that is Chrissy and Winston. As usual, there were performances on the other end of the scale, and contestants Ruth Hannah and Siren offered, what the judges thought, were bad performances.
Fashion
Digicel Rising Stars? fashion usually sparks interests with all Jamaicans. Host Yendi Phillips was a picture of chic in a form-fitting little pleather black dress, accentuated by her long legs and fashionable heels. Chrissy from the Chrissy and Winston duet was also sporting a black dress and heels, which worked well for her. Contestant Stratdon sported an all-black casual-feeling ensemble, complete with a stylish top-hat. Siren was certainly loud in a bright yellow top with heels and jeans. Ruth Hannah was the fashion flop of the night, sporting a rosy-themed floral top with yellow waist belt.
Judges
The usual the trademark flair of each judge was definitely present on the set of the first live show; Anthony’s curt and brute honesty, Clyde’s jokes, and Nadine?s sweet motherly advice. The most interesting comment of the night came from the one and only Anthony, when he passed judgement on Siren?s performance of Beyonce’s Flaws and All. M 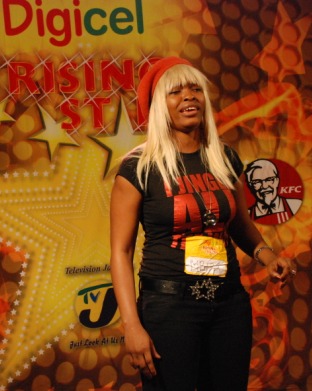 iller said that her performance would have been better if she had ?kept your mouth shut and walked around?. He finished the wallop of a comment with ?it really became unpleasant when you started to screech?.Clyde offered the night?s sweetest comment, after being bowled over by Brown Sugar?s performance. He said ?I think that you should come with a warning for diabetics, that was sweet?, to which the audience responded with roaring applause.Start voting and tune in on Friday to see which five of the eight will go on to make up the final top ten, as well as join TVJ next Sunday for the remaining seven contestants vying for a place in the studio top ten of the 2009 Digicel Rising Stars series.