THIS WEEK ON DIGICEL RISING STARS – It took us back in time this week, to a period when the music was easy, the vocals were hot, & the moves were cool

This week Digicel Rising Stars’ final eight put on quite a show for the most part, leaving the audience audibly happy, but the judges were a bit harder to please. Joining Anthony Miller and Clyde McKenzie as a guest judge was Jamaica?s own song bird, Karen Smith who was clearly impressed with the raw talent on offer. Popular Jamaica reggae artist of the retro era Flourgon, also joined the show, bringing the right amount of Reggae nostalgia to the Chill Room. He not only acted as Kiki?s co-host, but dropped a few samples of his more famous songs.
Outstanding Performances

Sandy Smith, who had a rocky start, has been gradually improving with each passing week. This week she again impressed the judges with her rendition of Dedicated by the Chirelles, showing her self-professed ?Hunger? for the competition. Karen commended her stating: ?I liked it, especially when you played with the last part.? Miller agreed, saying: ?The voice, the performance was a good match… good for you.? Clyde then brought up the rear of the positive comments with: ?We saw the hunger!?

Brown Sugar also managed to please both the audience and the judges with her naughty, blues version of I Am A Woman. After receiving some less than pleasing comments last week, Brown Sugar brought her all on Sunday night and reaped the benefits, leaving with all the judges on her side. Even ?Killer Miller? had only positive words when he commented: ?Easily the bravest selection tonight…and you?re naughty rendition of it was rock on solid.?

Kiki schooled the contestants in retro fashion this week, with her Dashiki dress and fluffy afro stealing the show! 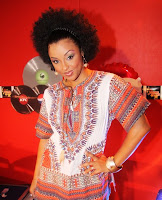 While Yendi?s rainbow infused strapless mini dress wasn?t from the retro time period itself, all the colours it contained, along with fuchsia gladiator pumps, and bright chunky jewellery brought a real psychedelic feel to the stage. One contestant who learnt the fashion lesson was Brown Sugar, whose yellow mini dress consisted of a bustier top, and a layered black chiffon and crimped yellow skirt. Her yellow, white and bronze open toed platforms along with blonde afro completed her funky look!

Moments held it down for the guys in their Disco style suits; with orange shirts, black jackets and black jeans with orange seams.

Diva Adena, known for her amazing vocals, gave a rather disappointing performance last week. Her performance this week of Honey Comb?s Want Ads, though much better, was still half a bar short of what we are used to. The Diva admitted after the show that she had been struggling all week with a sore throat. Though the audience, obviously impressed with her performance did not pick up on this, somehow the judges did. Miller started by stating: ?I wanted to say that like your complexion, your performance was flawless, but there were some problems?. He continued: ?you were struggling in parts… you should have chosen a different song?.

Angele, however brought the house down with his performance of James Brown?s I Feel Good. His creative dance moves had both the audience and Karen impressed.

However, unfortunately for him, Miller and Clyde were a lot slower to take the bait. He went on to receive one of Anthony Miller?s classic scorchers: ?There is an impression that people have that you are a good looking light weight, and your performance tonight did nothing to dispel that.? He then concluded ?good moves, thin voice.? Clyde agreed with Miller, stating: ?The dancing was better than the singing. This may be your last hurrah!?

The most caustic comment of the night went to Princess Tia, whose rendition of Diana Ross? I?m Coming Out, though done to the satisfaction of the audience, was a major turn off for Miller. ?Killer Miller? went to work when he told her: ?The question is, are you coming or going? I like oldies, but that wasn?t nostalgic, that was decrepit. It sounded like you were singing out of a coffin.?

The audience seemed impressed with this week?s show, with one member stating: ?last week did boring, but it look like dem back on track this week!?. Another patron quipped: ?This seems like it?s going to be a very stiff competition, because all of those left have strong voices, except Angele. But the voters seem to be doing well this year, weeding out all of those who don?t deserve it, first Dennilee, then Krissy and Winston, so hopefully they won?t disappoint in sending him home.?