?His tenor voice is as pure as the Caribbean Sea.? ? Washington Post

??one of the more soulful releases to emerge from the recent roots-reggae revival? (regarding VP debut Parables) – Time Out New York

??in his fifth Sumfest appearance, made the transition from promising opening act to impressive primetime performer??
? Billboard Magazine

Awarded Best Male Vocalist and Best Song at the 2008 International Reggae and World Music Awards, Tarrus Riley is the most promising of the second generation of Jamaica roots reggae singers. With an August 4, 2009 release of his much-anticipated third set CONTAGIOUS on Cannon Productions, distributed by VP Records, Tarrus Riley reaffirms that he is one of finest singer/songwriters of his generation, irrespective of musical genre. 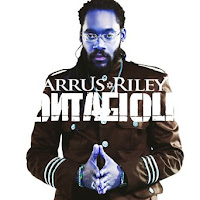 The son of Jimmy Riley – who has had a long career as a solo artist as well as being a former member of the Uniques and the Techniques – Riley’s songs retain ties to the Jamaican roots tradition while still managing to sound distinctly contemporary. In addition, his strong stage presence gives him crossover appeal and marks him as a coming force on the international reggae scene.

The album is grounded in a roots reggae tradition that is recast with a gleaming 21st century sheen courtesy of the album?s primary producer, venerable saxophonist Dean Fraser and created by Grafton and Tuff Gong studios sovereignty including Sly and Robbie on drum and bass, guitarists Mitchum ?Khan? Chin and Cat Coore, keyboardist Robbie Lyn and Dean Fraser?s impassioned sax styling.Contagious remarkably shifts between smoothly crooned lover?s rock and artful Rastafarian declarations, provocative commentaries and dancehall?s combustible edge, its cohesion provided by Tarrus?s spectacularly emotive vocals and reliably inspiring words. As its title indicates, this highly infectious collection of 18 songs is characterized by symptoms of melodiousness, rapturous roots rhythms and hard hitting lyrical realities that are transmitted through repeated spins, resulting in a high grade musical fever from which you will not want to recover.

?The reason why I called it ?Contagious? is because I would love for everyone to catch it,? says Tarrus. ?I don?t want my music to have boundaries of race, age, nationality or religion; I represent reggae, live music, and I want everyone to catch on to its positive, good vibes.?

Standout tracks are easily spread throughout Contagious. Tarrus returns to the rapid-fire deejaying of his Taurus days on ?Good Girl Gone Bad? (featuring rising dancehall star Konshens) produced by Tarik ?Russian? Johnston. On ?Don?t Judge?, Tarrus cautions harsh judgments often times leads to reckless actions. Random brutality, war and an array of social injustices prompts the contemplative ?Why So Much Wickedness??. A simple yet stirring invocation to His Majesty is expressed on ?King Selassie? and the title track ?Contagious? reworks the majestic one-drop rhythm from Bob Marley?s immortal ?Coming in From the Cold? as it details that untreatable sweet sickness.

Tarrus forthrightly addresses the wicked act of violence against women in ?Start A New? (produced by Shane Brown), urging the song?s female protagonist to leave her abusive man. As a means of calling greater attention to this malady, Tarrus has established a non-funded, anti domestic violence campaign, Start A New in which he, Blak Soil, Majah , the Area Yutes Foundation, Miss Jamaica 2007 Yendi Phillips and an assortment of artists regularly visit schools and speak to children from some of the island?s most troubled communities about the violence which many of them are exposed each day. ?We put on plays, perform and talk to the kids about things that touch their lives and violence is a part of that,? he explains, ?and they really appreciate that we would take the time to do that.?

Like his father, Tarrus has a sweet, nuanced tenor vocal style, he taught himself to play keyboards and several percussion instruments and began writing his own songs, many of which had strong Rastafarian and consciousness-leaning themes. His 2004 debut album Challenges was an impressive introduction to the Jamaican market deserving of a much wider audience. His sophomore effort Parables featured the most popular reggae song of 2007 ?She?s Royal?, won critical praise throughout the Caribbean Diaspora and almost single-handedly heralded a roots reggae renaissance.